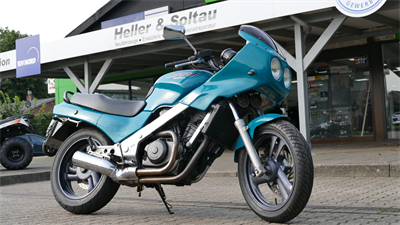 One of the biggest advantages of the Motorradtest.de team, besides our modesty, is that we are not too bad to test cheap used motorcycles. This time, an unusual 1994 Honda NTV 650 Revere went to check. The data: Only 24,000 kilometers run, stands for 1,700 at the dealership – and has the cardan drive, which is rare in this class. Get on and off!

Let's face it: motorcycles have to be loved simply because they have almost no practical utility value. If you still want to have one, but don't want to make yourself poor (or can), look for the reasonable in the unreasonable, then tester Markus comes into play. Markus doesn't care how it comes, the main thing is it has two wheels and an engine. If it's the 158 hp Ducati Multistrada, it's driven across the runway at full throttle – and if it's a weaker test object, then it's not, but it's still fun. It comes as it comes.

Markus likes to ride old mopeds, as they remind him of his time, which in hindsight is gladly provided with the transfiguring addition the "good old one". Stories about stories I could ... but I digress. In a nutshell: The test object of this used motorcycle check is the ("good old") Honda NTV Revere. Their basic data are quickly told: The V2 motorcycle was a real market success between 1988 and 1997, with around 15,000 machines bringing Honda to the man (plus f/d). A nearly 650 cubic metre V2 initially provided 60 hp, later less than 50 hp.

The performance reduction over the years is not all unusual, because the NTV has a gimbal drive. Short detour into technology: A shaft running in the oil bath, the cardan shaft, transfers the power of the motor to the rear wheel instead of a chain with gears. Advantage: There is no need for maintenance work such as chain clamping, grease, cleaning and replacement after approximately 20,000 kilometers. Except for an occasional oil change, the cardan is very easy to care for, which makes it extremely popular with touring drivers. However, such a cardan is heavier, and if something breaks, it becomes expensive. This is not to be expected with our test object, because it has only run 24,000 kilometers. It is said to cost a slender 1,700 euros, while it cost around 10,575 ("good old") German marks a new one. Our NTV is available from a dealer, which is why handover inspection and fresh TÜV are included in the package price. 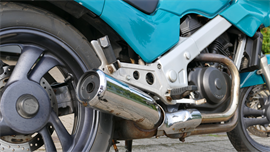 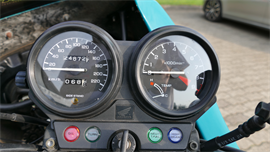 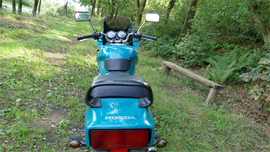 Still with choke and light switch

Also included is the retrofitted front mask with double headlights, the Honda is a Naked Bike as standard. Leaving aside the eye-catching box frame, the modern equivalent of the Honda would be the Suzuki SV 650, also with V2. You have to live with the color, which is called green, but in the video can not hide a clear stitch in the baby blue. The retro traveller Markus also likes this in the most exquisite way, today it is the first choice for the rest of the team as a tribute to the 80s.

The 80s literally jump on you when you're sitting up. Wherever the gaze falls, he looks at the modernity of bygone times. Or what was thought of at the time: analog instruments, four glowing warning lights for oil, idling, blinkers and high beam. Mirrors were worn large and clear and box-shaped at the time. The Honda's are even bigger and clearer and box-shaped, which is seen in the test as a safety gain. Curious, but useful is the display for the folded out side stand. Since there is no TFT display - which would have nothing to display anyway, because there is nothing that does not need to be mechanically adjusted - modern pilots surprise two additional controls that used to be commonplace. The NTV has not only a light switch, but also a choke. Not in view, but you should not lose sight of the turning on the left flank, namely that of the gasoline tap. We've been steeled for generations, so we're getting back in quickly.

Enough of the pre-talk, the truth is on the street. 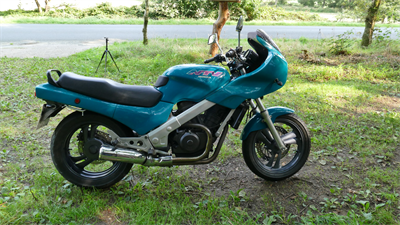 Sitting up is comfortable, there is enough seating space in the second row, even compared to most modern Naked Bikes. So the problem is not sitting up, it could be sitting down, especially for pilots with longer legs. The knee angle is quite pointed. If we were to divide Markus horizontally at the height of the belly button, which we did not do, then Markus' top would be comfortably accommodated, his lower part on long-haul rather not so. Unusual, but by no means bad, is the narrow handlebars for today's conditions.

Starting and starting off is easy, the operation does not annoy with the opposite of smooth running. Unfortunately, the Honda also takes it lightly and loosely when braking. This shows the greatest distance to modern bikes: The single disc at the front ensures that riders from an intelligence quotient of 75 upwards always pay attention to the safety distance. Better is that!

Overall, the Honda looks well done, processed and assembled with reasonable parts quality. Somewhere he has to come, the reputation of this Japanese company. Of course, something is bursting here and there, and the first shine is gone. But overall, it's doing well. By the way, it rides just as well: The almost 50 hp ensure a zero hundred sprint of 5.3 seconds measured in absolute numbers, there can be no complaining. It is 175 km/h maximum, this is ok. The Newton meters have arrived at 6,500 tours for the assembly, the Honda pulls through well. Not always, however, because occasional misfires indicate a need to speak to the seller. There is no constant driving jerking, handlebar beating or load change, the gearbox switches exactly.

So all right, Markus, would that be a buying candidate after the inspection? Here yes, if you get to grips with the misfires, the Honda NTV Revere would be a very good purchase. However, this is due to the condition of the machine. This does not mean scratches or optical things, but the condition of the wear parts. If the brakes are gone, all liquids are changeable, tyres are old and cracked, a handsome soup would come up at the cost price of 1,700 euros.

Markus drew a very similar conclusion during the test of the Suzuki GS 500 E, and it has lost nothing of its topicality.

The test bike was provided to us by Heller & Soltau in St. Michaelisdonn.