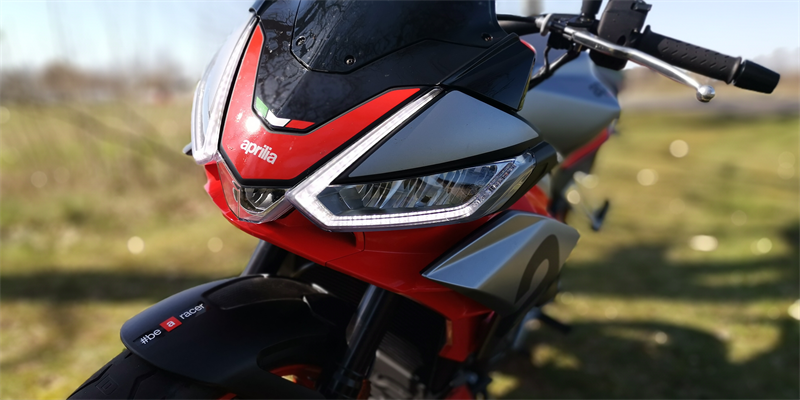 Photos: BikeReview.info
Magnificent, the Aprilia Tuono 660 is a true Italian. With corners and edges, too much divergent, but always with character and never arbitrary. So we want motorcycles, not one thing, but statement pure: #be a racer!
Tunos have been around from Aprilia since 2002. The recipe is always the same: build a racer (in this case the RS 660), take off the cladding and raise and widen the handlebars - the Naked bike called Tuono is ready. By the way, this does not translate tuna (greetings to 1000PS Zonko), but thunder. And that's exactly what it sounds like, but more on that later. In our opinion, the Tuono 660 is not a real Naked bike, but the half-shell covering and bikini disc is a bit too present. But it doesn't matter, it just looks stunning - also thanks to bikini disc and half-shell!

The walk around the motorcycle offers invariably beautiful views. Magnificent bridge frame, beautiful to look at two-arm swingarm and an attractive lamp design at the front and back. The whole thing garnishes with bright red rims and a stub exhaust as well as a tank wide and slim running down. This is astonishingly reminiscent of Yamaha's MT-09, but is somehow more Italian at the Aprilia. Design you can stop the Junx and girls from Noale.

Okay, then let's sit on the Tuono 660. Although the machine is quite small according to the data sheet (wheelbase only 1.37 m), Dietmar has enough space with its 1.84 m. You sit in rather than on the machine, the sitting position is streetfighter-like upright. The footrests are a bit high, but not as high and far behind as with the RS 660. The machine weighs only 183 kg (fully fuelled!) and can therefore be ranked super-lightly. We prefer to cover the cloak of silence about the comfort of the sun - that's not so dolle. But who please buys an Aprilia to move around the area for two. After all, the machine also features "Aprilia Racing" and not "Aprilia Comfort Travel". So Volker, get off quickly, I want to go!

The Tuono 660 has a rather small TFT colour display, which also looks a bit playful. There are Ride by Wire and five driving modes, three of which are for the road and two for the race track. A road mode is called "Individual" and it keeps what it promises: you can set five parameters: power, traction, engine brake, wheelie control and ABS. Not bad for a middle-class naked bike. In series there is also a cruise control (!), optionally there is also a multi-axis IMU for slanting position control.

Aprilia is also in full swing when it comes to braking systems. The Brembos front and rear work excellently and have easy play with the light weight of the Tuono. The brake is biting and still easy to dose, the machine is immediately on command when it must be.

Incidentally, the windscreen of the small bikini disc also works surprisingly well. The helmet lies completely in the wind without turbulence and shoulders and torso are close to free from the wind pressure. 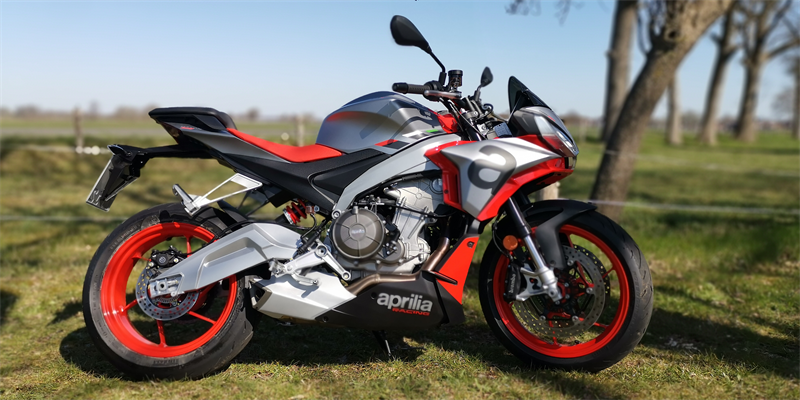 Enough of the theory, now we're off. As soon as you start, you hear right away, someone wants to move forward! How the Italians manage to get their machine through the Euro 5 approval remains a mystery to us forever. The sound is similar to an older Ducati Monster (soundcheck at the top right). The row twin makes a 270 degree lifting pin offset to V2 and at least when you give gas, it gets really loud! But not only the volume is beguiling, also the sound design is extremely successful.

The first meters with the Aprilia Tuono 660 are surprising: the machine is more accessible than expected. The gas acceptance in the two modes "Commute" and "Dynamics" is suitable for beginners, only in individual mode it becomes more direct and a little more restless. The differences in driving modes are immediately noticeable - unlike many other motorcycles. From soft and tame to raw and rough, everything is there. We think this is great and real racers are immediately rewarded with a real Aprilia feeling in the sharpest mode.

The Tuono impresses with its super-agile chassis and is razor-sharp. It reminds us very much of the driving behavior of the KTM 890 Duke R. Once found, the Aprilia razor-like follows through the curve. "Be a racer", with the Tuono no problem. It's not quite as fine as a Triumph Street Triple,but its slightly rawer character still excites us. As is so often the case, the 95 hp turns out to be completely sufficient and make the machine A2 throttle-capable. Not a bad move from Aprilia, because the target group for this bike should be quite young - and you don't want to have to buy a new machine every 2 years.

Acceleration and passage of the Aprilia Tuono 660 are common in class, but somehow feel better or faster. This is probably due to the omnipresent sound. The Kayaba chassis (train stage & preload adjustable front and rear) does a super sporty job without savoring comfort. The same applies to the Pirelli Diablo Rosso Corsa II, not exactly a cheap rubber.

You Aprilia Tuono 660 keeps what she promises. She is a sporty-racy naked bike with gaaaanz a lot of character. The price of 10,500 euros is somewhat ambitious, especially compared to the sister RS 660, where the QuickShifter is in series production. Despite the surcharge of 219 Euro on this bike we would definitely recommend the QuickShifter, because it fits a) to this bike and because b) the 6-speed gearbox is a bit boney and hooky.

The Tuono doesn't leave you cold, it's not perfect and that's a good thing. Each ride becomes an experience and design as well as volume let a Tuono biker stand out from the crowd - bike!

The test bike was provided to us by Zweirad-Technik-Schielmann in Bokel - thank you very much.