The new mid-range Enduro from Italy in the test 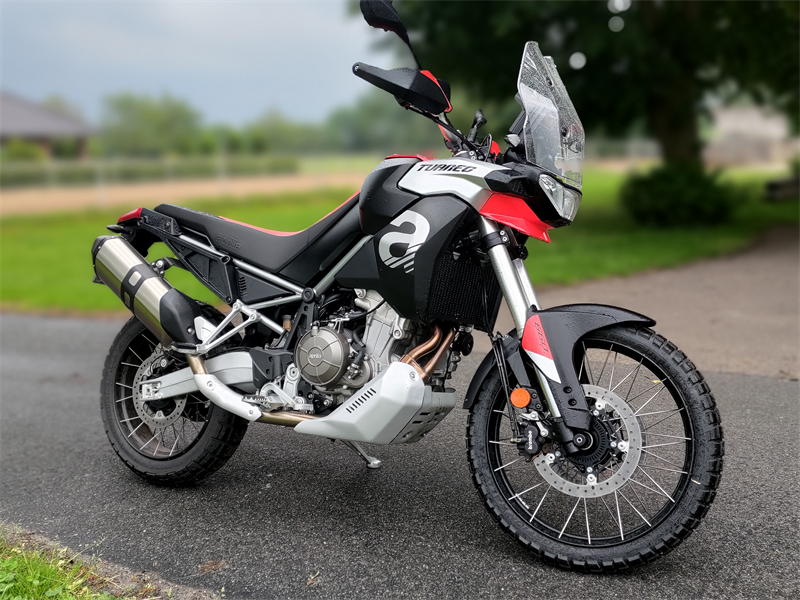 Photos: Motorradtest.de
Wind is coming into the class of really all-terrain travel enduros. With the Tuareg 660, Aprilia has potential buyers of the Yamaha Ténéré in mind. Meike and Dietmar checked whether it was worth taking a look at the Tuareg during a test drive.

Anyone who used to be interested in an all-terrain machine always had a huge selection. Yamaha XT 500, Honda XL 500, Suzuki DR-Z 400 & Co. were on every corner. But somehow it has become quiet around this kind of motorcycle. Today's adventure ships GS & Co. may cut a fine figure on long journeys and on the motorway, but they are simply too heavy for the terrain.
Yes, there are still real enduros, e.g. from KTM or Honda, but these are less suitable for the long or comfortable journey. Yes, of course we also know Itchy Boots, who makes very long journeys with such bikes, but it doesn't look really confi somehow. Only Yamaha has recognized this and with the Ténéré again a bike for the rough ground and the long journey in the program. Until now: Aprilia presents with the Tuareg 660 a direct competitor to the Yamaha. These are available in three colors and cost from 11,999 euros.

By the way, there have been two Aprilia Tuareg before: The Tuareg 600 Wind was built from 1988 to 1991 and the Tuareg 350 from 1986 - 1989. However, these old irons no longer have anything in common with the new machine. The Tuareg 660 built in 2022 is technically very well equipped, but more on that later.
First of all, we sit on the bike and see how it feels. The seat height of 860 mm is appropriate for an enduro, but due to the narrow seat you can still get to the ground well. However, you should not be smaller than 1.75 m for a safe stand.
Long spring travel of 240 mm and an official metal oil pan guard signal: Attention, warm showerers, I don't just want to go to the ice cream parlour. This fits the small rally disc, which allows a - let's say 1B windbreak. Visually, the Tuareg 660 is immediately recognizable as Aprilia, especially from the front. Although the lamp mask with the shield has nothing to do with the sister models RS 660 and Tuono 660, you can recognize the 660 family at first glance. Very pretty. 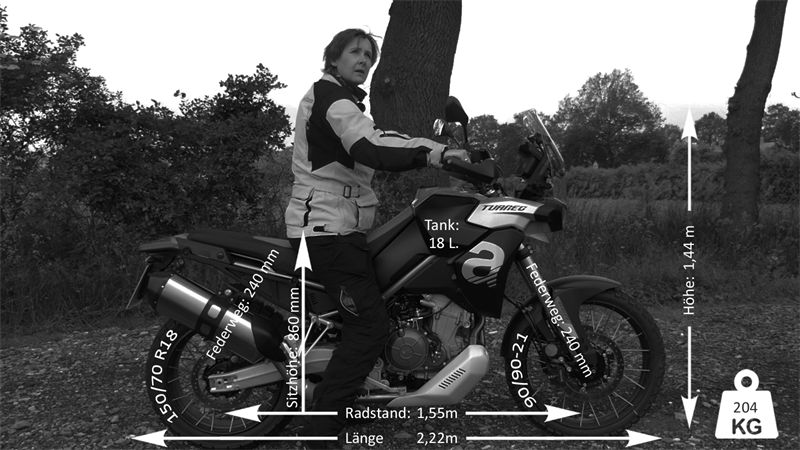 Man/woman sits relaxed on the Tuareg 660, assuming a minimum height of 1.75 m.

360 degree tour around the Aprilia Tuareg 660 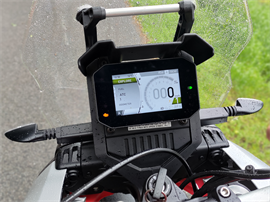 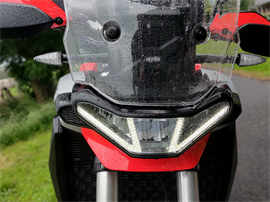 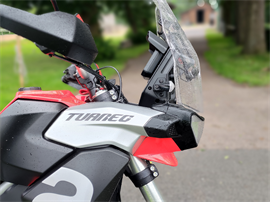 Technology of the Aprilia Tuareg 660

The Tuareg is very well equipped compared to the Ténéré. There is ride by wire, customizable driving modes including off-road mode, a 5" color TFT display, a four-stage traction control, switchable ABS, cruise control and even a three-stage engine drag control - and all this in series! Not included is a lean angle sensor, the QuickShifter and the mobile phone coupling only for an extra charge.

The operation of all these functions is child's play. There are four control buttons for menu navigation and the structure of the functions is immediately understood. By Italian standards, the display is also downright sober. 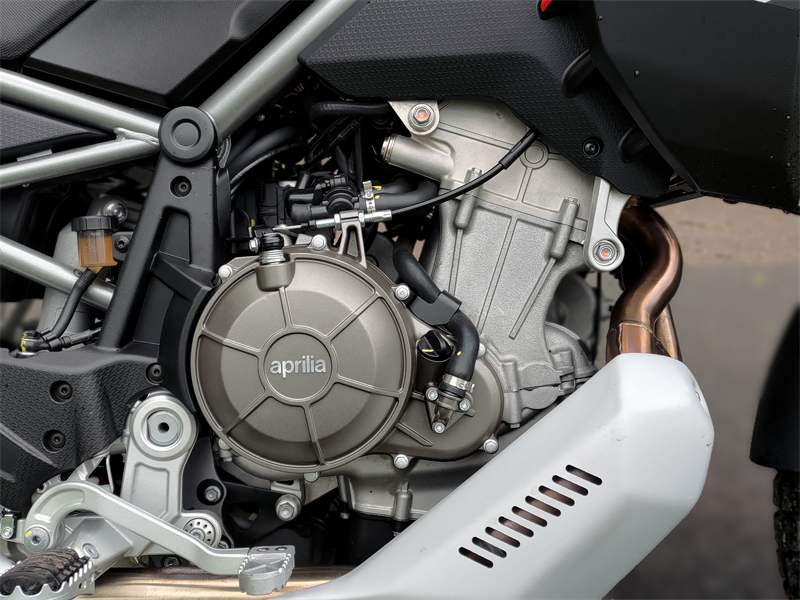 The Tuareg is very easy to steer through traffic and terrain. Due to the low weight and the very wide handlebar you have the bike under control at all times. If you ride standing up, the perfectly positioned footpegs and the high handlebars come towards you. You can easily drive standing up for a long time without it feeling wrong or even exhausting. Interestingly, the Tuareg does not notice its rather long wheelbase of 1.55 m. The machine is super manoeuvrable and above all the strong steering angle allows tight corners and results in a mini turning circle.
The sound of the Aprilia Tuareg 660 is okay and comparable to the other two 660s of Aprilia. You can hear when revving up that you only have 659 cubic under your butt here, but at lower speeds the engine or exhaust is nice and bassy. Sound check top right. Did we mention that the bike has wire-spoke wheels? Of course it has. 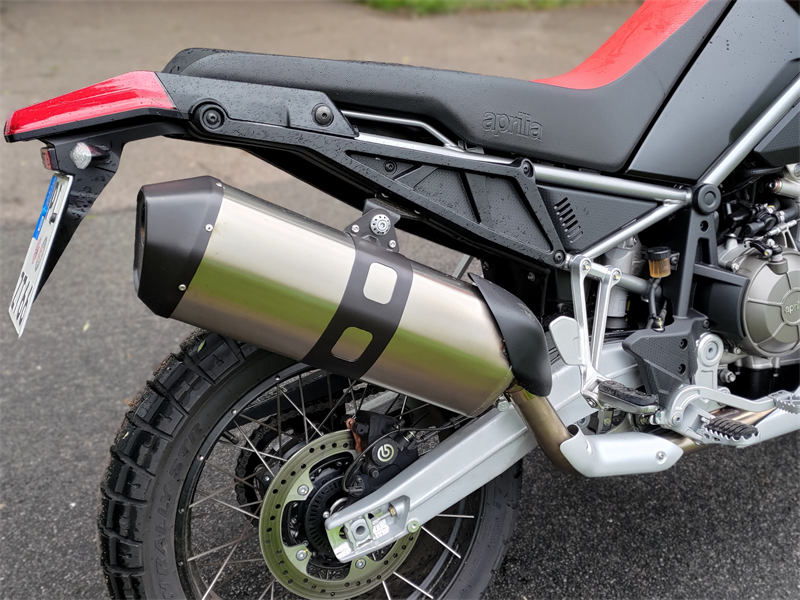 The popular Pirelli Scorpion Rally STR are used as tyres. With an Enduro from Italy, which should also ride on the road, this choice is almost inevitable. The chassis comes from Kayaba and is fully adjustable on both the fork and the central strut. The beautiful aluminum two-arm swingarm is quite long. In combination with the 21-inch front wheel, this leads to a very stable handling. The Ténéré has just such a 21 inch front wheel and an even longer wheelbase of 1.59 m, but drives very similarly.
>>> comparison Aprilia Tuareg 660 vs. Yamaha Ténéré 700
The comparison to the Yamaha is also obvious in terms of performance, because both machines are rather moderately motorized. 73 hp to 80 hp are on the books, with both bikes delivering both maximum power and torque at similar speeds. And indeed, it feels similar, with the Tuareg going a little stronger forward. Both machines, on the other hand, are not performance monsters, although this is not necessary for enduros. The brake system of the Aprilia comes from Brembo and the 300 mm double disc at the front with 4-piston fixed caliper does a good job.
There is a little surprise in terms of consumption. Only 4 liters per 100 km/h should swallow the Tuareg, which we did not control. In combination with the 18 liter tank, this would result in a range of 450 km, not bad. Thanks to the payload of 210 kg, an extensive tour would theoretically also be possible for two, whereby the Aprilia does not reach the pillion seating comfort of a "real" travel enduro a lá GS & Co. Off-road for two is not exactly a good idea anyway, so Aprilia certainly did not have a very good pillion operation in the specifications at the Tuareg.

The Aprilia Tuareg 660 is a good travel enduro with a strong tendency towards "enduro". This can be seen visually in the engine protection, the 21 inch front wheel and the long spring travel. Nevertheless, the bike also feels good on the road and is not out of place there. Criticisms are the non-adjustable windscreen, the somewhat loveless stickers (not painted over) and the somewhat economical space for the passenger. Apart from that, the Tuareg is doing a good job.

The price of just under 12,000 euros is okay compared to the Yamaha (about 11,000 euros), as the Aprilia is technically better equipped. The advertising slogan "THE BEST OF BOTH WORLDS - Maximum performance and high driving comfort" may be a little exaggerated, but it's true: The Tuareg cuts a fine figure both off-road and on the road.

The test bike was provided to us by ZTS (Zweiradtechnik Schielman) for this test. ZTS is located in Bokel, where you will find beautiful country roads and also a little terrain for an extensive test drive. Coffee is also available there, so a trip to ZTS is worthwhile. Greetings to Hajo!
Vergleiche die
Aprilia Tuareg 660
mit anderen Motorrädern