The comfortable intercontinental missile from Austria in the test 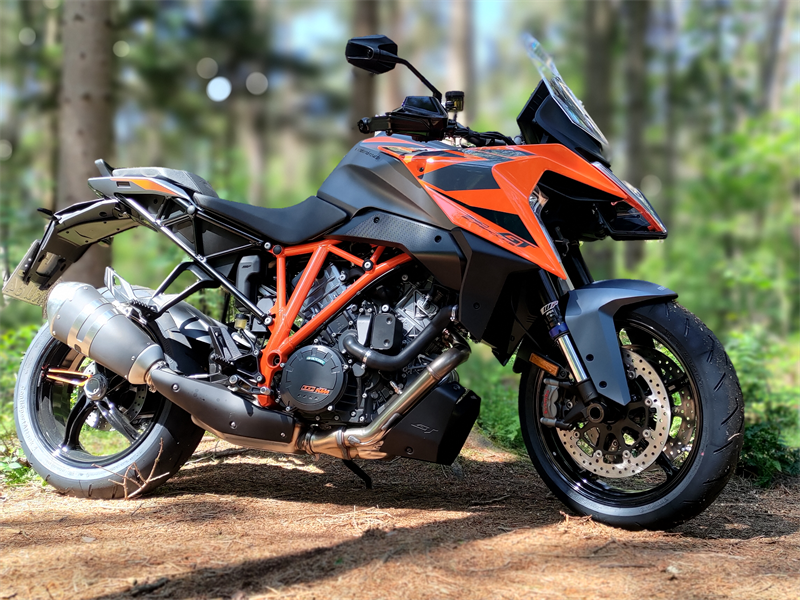 Photos: motorradtest.de
KTM refers to its revised 1290 Super Duke GT as an "intercontinental ballistic missile". This may be a somewhat inappropriate comparison in these times, but in terms of content it is true. Even after the Euro 5 homologation, the GT is still what it has always been: a real steam hammer. Markus and Dietmar have checked whether she also has touring qualities.

It's no secret that KTM motorcycles are not for everyone in terms of appearance. This is also the case with us: Markus doesn't really warm up with the Kiska song line, Dietmar thinks it's bomby. Both agree that the GT is immediately recognized as such. It is an independent bike and you can recognize it 100 meters against the wind.
Beautiful is the orange powdered chrome-molybdenum frame that seems to capture the engine. The lamp mask at the front has slipped down a bit compared to its predecessor, but still has the typical KTM praying mantis look. KTM bikes are usually very orange and so KTM did without other liveries. Good job.

The Super Duke GT 2022 is available in orange or orange. Makes the selection much easier.

Seat test: Markus finds that you sit comfortably and upright, but still tilted a little forward in contrast to an adventure machine. Dietmar thinks that you sit very upright, almost like on an adventure bike, but that the seat is quite tight. But it doesn't matter, because as always at KTM there are more comfortable and heated benches for the elderly gentleman in the accessories shop for 243 €. But you also sit on the series bench really very comfortable and also the passenger can not complain about lack of space or even missing grab handles. Mongolia, here we come. Also with the original KTM cases for 780 € and the top case for 292 € and the tank bag for 185 €. The range of accessories for the GT is impressive and leaves nothing to be desired. 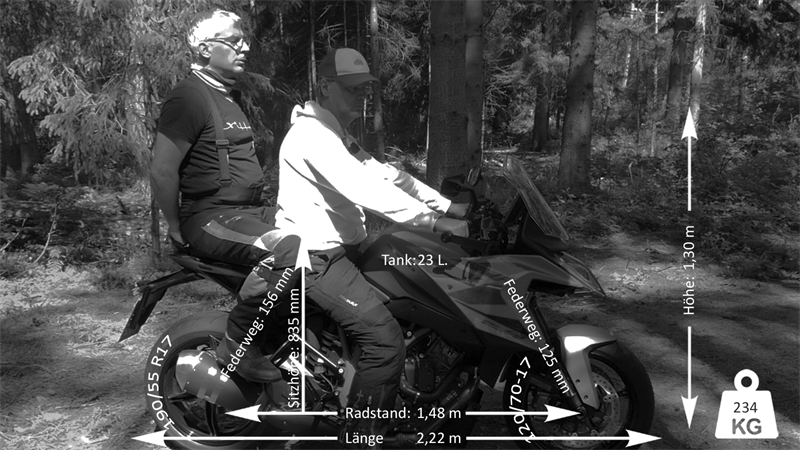 Driver and co-driver have plenty of space on the GT. GT stands for "Grand Tour". I am good. 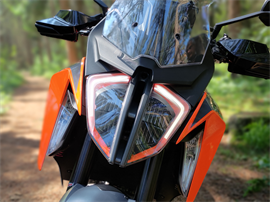 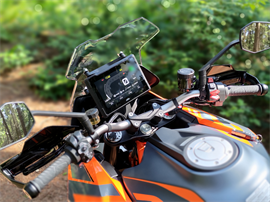 Can do almost anything

Technically, the GT comes with everything your heart desires. Markus printed it out: 7 pages! Except for the optionally available QuickShifter, everything important is already on board in series production: semi-active suspension, lean-dependent multiple traction control, Bosch 9ME cornering ABS, cruise control, ride by wire, driving modes, tire pressure monitoring, heated grips, adjustable windscreen, fat and really easy to read 7" color TFT display, turn signal reset and a turn by turn navigation via smartphone app as well as full LED light including cornering light coupled to the lean angle sensors!

Optionally available are wheelie & launch control, engine tow control, hill start assist and the QuickShifter. If you want to have all that, it's best to opt for the TeckPack for 1,072 euros. Despite this cornucopia of functions, the GT is really easy to use. This is due to the switches in the new design (4 direction keys + Enter + back key) as well as the well-made pictograms in the display. Even without operating instructions, you can immediately see what you are setting incorrectly. Compliments to KTM: Hardly any other manufacturer manages such intuitive operation of so many functions. 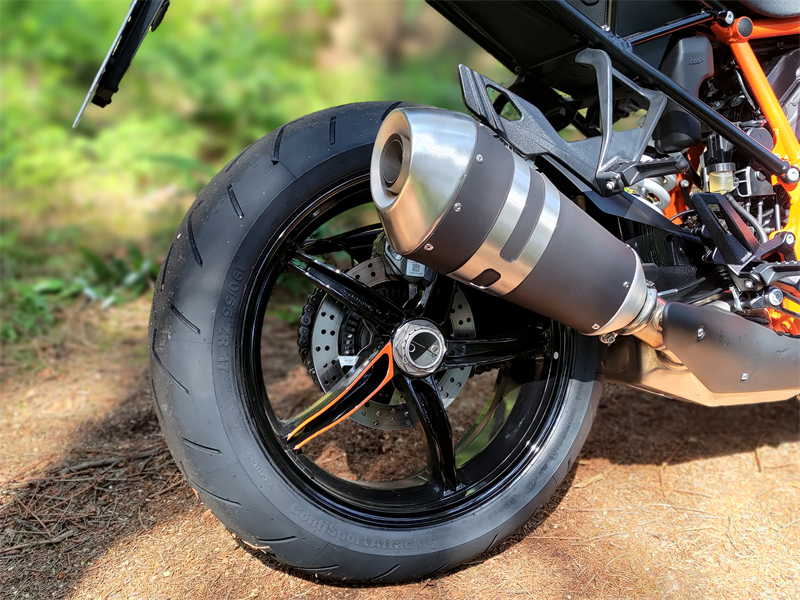 A quick note about the optics: The Super Duke GT has an aluminum single-sided swingarm. Theoretically, the view of the rear wheel could be completely free - but it is not, because KTM has put the exhaust in front of it. Nevertheless, the port side sight is awe-inspiring. The 190cc Conti Sport Attack 4 looks great and KTM has also improved the rims compared to its predecessor: These now weigh about 1 kilogram less - not bad, because reduced unsprung masses contribute directly to manoeuvrability and riding pleasure.
The sound of the Super Duke GT suits the bike: Bassy and not so quiet, the V2 bollers along. We can hardly believe that the stationary noise is 93 dB suitable for Tyrol. In any case, the sound is great and testifies to the potency of the 175 hp bolide. And that brings us to the performance of the GT: casual and confident is probably the best. The LC8 V2 has always been a force, especially in the sister model Super Duke R, which is why it is often called "The Beast". The GT has five horses less at the start, but thick 141 Newton meters at 7,000 rpm - so much earlier than the R.
This fits wonderfully to a sports tourer, you always and forever and even at lower speeds Wums without end. However, this does not change the fact that the V2 only feels really comfortable from 3,000 rpm. There is not wild chain-beating underneath, but you still can't get rid of the impression that the powertrain is reluctant to implement the forward thrust below. Even the quiet "gondola through the village" in 5th gear at 30 km/h is not the GT's thing. But if you buy this bike, you also want something completely different...

Namely step on the gas - and off you go for the wild ride! The experience of acceleration on the GT is difficult to reproduce. Other bikes are also fast, but the GT is very fast. Due to the soundscape (intake noise!) and the noticeably working engine, the pilot then feels twice as fast. It's just a lot of fun to turn the tap with the Super Duke GT.
Added to this is the very precise and sensitive chassis. The GT finds the right track by itself and the short wheelbase also turns the bike into a small curve robber. The fact that the WP-APEX chassis is electronically adjustable and also works semi-actively makes the whole thing even more valuable. Adjust damping - 2 seconds. Change spring base from solo to pillion passenger with luggage: 3 seconds. Change driving mode: 1.5 seconds. KTM has actually made an ever better fine-tuning when it comes to suspension. The GT is razor-sharp, agile and bombproof at the same time. Similar to a BMW S1000R, you have the feeling that the power of the bike is controllable. Really good stuff!

The new 1290 Super Duke GT has actually gotten even better. The many Tec updates may not be everyone's cup of tea or absolutely necessary, but they all work splendidly. The brakes are very good and the range of about 400 km is suitable for touring. The GT lives up to its name and, thanks to its seating position, is also suitable for longer tours. Nevertheless, the sporty character is always present, Ready to Race everywhere, just typical KTM!

The test bike was provided by Motorrad Ruser . This dealer based in Haseldorf near Hamburg has all sorts of KTM and Yamaha bikes in stock as demonstrators and the country roads around Haseldorf invite you to a magnificent test lap. So, let's go to Haseldorf. Please send greetings from us to Jessi and Hermann, and do not miss the new coffee machine. We recommend cappuccino or latte macchiato.