Series production of the new Ducati Monster is underway 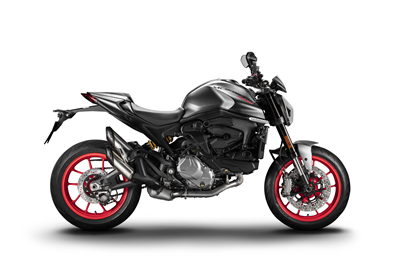 Series production of the new monsters has started at the Ducati plant. From April 2021, it will be available at all official Ducati partners. MotoGP riders Pecco Bagnaia, Enea Bastianini and Luca Marini have not taken it for themselves to experience the "birth" of the first new monsters just before the start of the tests of the 2021 racing season in Qatar. During their factory visit, the professional racers accompanied the complete assembly of the bike and had each production step explained personally by the experts on the conveyor belt.

This is the new Ducati Monster

With more than 350,000 units produced and distributed worldwide, the Monster family is the best-selling and longest-produced series in the history of the Bologna-based company. The new model generation, which was presented online for the first time at the Ducati World Premiere 2021, was created in the spirit of the original philosophy of 1993: a lightweight, purist sport-naked with a superbike-derived frame and a powerful motor, which is also perfectly suited for road use in all sportiness.

The new monster is lightweight, compact and offers unrestricted driving pleasure. Intuitively manageable, it is the ideal motorcycle for those who approach the world for the first time on two wheels, and is also a great driving machine for more experienced and very experienced motorcyclists. Thanks to its impressive and easy-to-control performance, extremely low weight, agile and intuitive chassis and state-of-the-art electronic equipment, it is perfect for fun for new generations of motorcyclists.

The heart of the sporty and fun monsters is the 937 cc L-Twin Testastretta 11° engine with desmodromic valve control. The maximum power is 111 hp at 9,250 rpm. The maximum torque of 93 Nm is already 6,500 rpm. Thanks to the significantly increased displacement compared to the 821cc version, the torque has improved over the entire speed range, especially in the middle and lower speed range, which is most frequently used on the road and in corners. The engine of the new monsters guarantees an exciting performance and high driving pleasure, also thanks to the new gearbox and the standard Ducati Quick Shift Up/Down for clutch-free, super-fast gear changes. 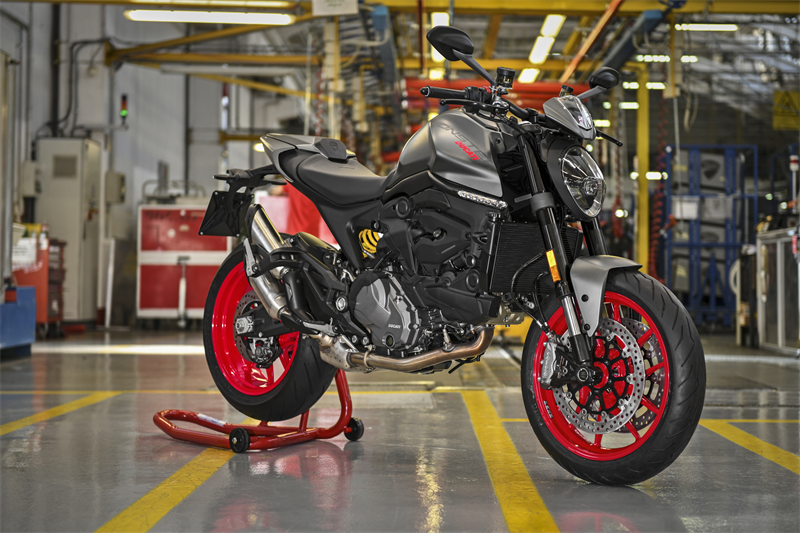 Ducati's engineers and designers have put a lot of effort into significantly reducing the overall weight of the new monsters. The vehicle has been completely redesigned for this purpose: auxiliary frames, rims, swings – and above all the main frame, which is now made of aluminium and integrates the engine as a supporting component.
Conceptually, this design corresponds to the Panigale V4 and means a weight reduction of 4.5 kg or about 60 percent compared to the previous lattice tube frame. The new chassis and the now 2.6 kg lighter engine have reduced the dry weight of the monsters to only 166 kg (almost 20 kg less than the Monster 821), which gives the new monster even more agility and outstanding handling.

The design reinterprets the key elements of the monsters – for example, the "bison back" tank, the round headlight, the clean rear, the central engine block – and creates a contemporary motorcycle. The classic forms have been further developed to highlight the essential features and outstanding technology. Thanks to the very narrow side contours, the driver can easily bring both feet to the ground in the stand. The seat height is now 820 mm as standard. By means of a flatter seat made of the accessories and a special spring kit, the seat height can be reduced to up to 775 mm.

The ergonomics of the bike have been significantly improved compared to the Monster 821. The seat moves closer to the handlebars. As a result, the driver takes a more upright position and the wrists are less stressed. The newly positioned footrests also favour the more comfortable driving position. The steering angle has been increased to 36 degrees (a total of 7° more than the 821) to facilitate driving manoeuvres and ensure maximum manoeuvrability even at low speeds and in urban environments.

The standard electronic equipment ensures the highest level of active safety and includes, among others, curve ABS, Ducati Traction Control (DTC) and Ducati Wheelie Control (DWC), all of which can be adjusted several times. The sporty character of the new monsters is also underlined by Launch Control, which enables lightning-fast launches. Extensive standard equipment includes the hydraulically operated anti-hopping clutch, radial brake and clutch pumps as well as adjustable levers for front brake and clutch.

The new monster is equipped with three riding modes (Sport, Urban, Touring), with which the rider can customize the character of the motorcycle according to mood and needs. The throttle response is very controlled thanks to the Smart Power Modes. In the first and second gear (urban and touring) or only in the first gear (sport) they adjust the torque specifically and thus facilitate driving. All settings can be conveniently controlled via the controls on the handlebars and the 4.3" TFT colour display.

The modern colour display impresses with its clear racing graphics, which are also used in this way on the Panigale V4. The focus is on the large rev counter and the display of the inserted gear. Even when driving in a sporty way, the driver always has all the important information in mind. Via the Ducati Multimedia System (DMS), the smartphone can be paired with the motorcycle via Bluetooth. A USB interface under the seat provides power to mobile devices while driving.

The monster has always been synonymous with individualization. For the new generation, Ducati has developed exclusive stickers and graphic kits that enhance the shapes of the monsters and celebrate the sportiness of the brand. Ducati customers can make their motorcycle even more unique. On the website www.ducati.de there is an extensive bike configurator with which you can play through all the individualization possibilities.

In order to make it easier for young enthusiasts to enter the motorcycle world, the new monster is also available in a performance-reduced version with 34 kW for owners of the A2 driving licence class.

The new monsters are available in the colours Ducati Red and Dark Stealth with black wheels and in Aviator Grey with red GP wheels. Anyone who wants to express even more sportiness can order the Monster Plus in the same colours with standard front panelling and passenger seat cover.