Photos: BikeReview.info
The standard 890 Adventure tested here was not presented by KTM until the beginning of 2021 after the R and the Rally. It is designed for the road rather than the terrain and at 13,295 euros it is also cheaper than its sister models. Compared to the previous model, the KTM 790 Adventure, KTM has screwed mainly on the engine. The rear strut is now adjustable and the brake has also been improved. Visually and ergonomically, however, little has changed.

Design and appearance are known to be a matter of taste. But one thing is clear: the KTM 890 Adventure polarizes. The deep-drawn tank and the insectoid lamp mask are not for everyone. But you can recognize this motorcycle at first glance. The machine is available in orange and black. KTM disciples don't have to think long about this color selection, but e.B. our tester Markus finds the black version more chic.
Not much has changed between the 790 and the 890 Adventure in terms of dimensions and seat ergonomics. The spring travel is still 200 mm, front 21 inch rim, rear 18 inches, seat height 830 - 850 mm. You wouldn't blindly recognize which bike you're on. The handlebars are high, you sit upright, adventure bike feeling stop. Class: The handlebars can be adjusted 6 times. Strange: The shifter seems to be tuned to enduro riders with gaaaanz thick boots: For us it is mounted far too high, but you can also screw down, so no problem.
The machine weighs 220 kg. This is relatively little for a travel enduro and that's how it feels when manoeuvring and driving. In contrast to the adventure thick ships like GS & Co., it is not quite as full on the road, but it is beautifully handy and "nimbal", as we Englishmen tend to say.

The technical equipment of the KTM 890 Adventure is actually good with three driving modes, curve ABS, slant-dependent traction control, 5 inch color TFT and smartphone connect. However, we find it completely incomprehensible that the cruise control switch is on every 890, but the function has to be purchased or activated. If you don't want to, you have a cruise control switch with no function on your bike! This should probably save production costs, but KTM could have been a bit more generous and could have unlocked the cruise control in series.

Our test machine does not have a QuickShifter, but other testers attest to it with the finest qualities. So if you are standing on gears without domes, you should accept the additional price.

The lighting is completely designed in LED. There is an LED daytime running light, which, as always with KTM, can not be activated by switch, but in the cockpit settings. By the way, the 890 Adventure still has the old switch setup. The new switches are reserved for the 1290 SAS and the 1290 Duke - not entirely comprehensible for us, but also not decisive for war.

The in-line twin of the KTM 890 Adventure now produces 105 hp and 100 Nm of torque. Compared to the 790 Adventure, that's 10 hp and a whopping 12 Newton meters more. The increase in performance is particularly noticeable during the passage. The motor has also been given additional flywheel mass, which should allow a smoother run at low speeds. The 890 Adventure actually runs about "adult" and has fewer problems with low-speed driving than its predecessor. But there is no difference like day and night, the basic orientation of the engine has been preserved.
> Comparison KTM 790 Adventure vs. KTM890 Adventure
KTM has also reworked the coupling. It can be operated with surprisingly little hand power and has an anti-hopping function. The paths for changing gears are KTM-typically very short and crisp, you get a good feedback. The idle ness was a bit every now and then, but you get used to it.

We really liked the chassis of the 890 Adventure. It is perfectly balanced and provides a safe driving experience. The machine tilts "exactly right" into the curve and there are no movements in the bellows. If you get started properly, the bike in the front quickly becomes light and a little nervous on the forehand. A travel enduro is not a racing machine and the 890s is no exception. Nevertheless, we would definitely call this motorcycle sporty compared to other travel enduros - Ready to Race.
The brake system from Brembo deserves an extra praise, which is toxic and can still be dosed well. The bench is rather on the tight side and roughened, so that you sit safely in the saddle. If you like it rather cozy, there is a corresponding comfort bench in the KTM shop, which is much softer upholstered. The windscreen could have been a little better for our taste. The production disc causes wind noise on the helmet. As we know, this depends on many factors such as driver size and helmet, we do not want to make a general recommendation for another disc, but we have had very good experiences with the Givi Airflow on our KTM 1090 Adventure as well as on a Suzuki V-Strom 650. 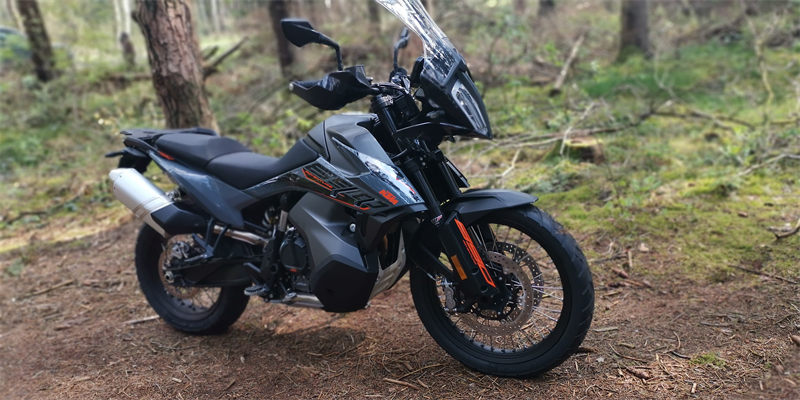 More steam, more technology, more fun? After our test, we can answer yes to this initial question. However, owners of a 790 Adventure don't have to go straight to the KTM dealer and buy an 890. The differences between these two bikes are not as great as KTM likes to portray. Nevertheless, the 890 Adventure is the better motorcycle.

Competitors are the Triumph Tiger 900, the Suzuki V-Strom 1050 and the Ducati Multistrada 950 - the travel enduros of the upper middle class. The difference from the upper-class thick ships such as the BMW GS 1250 and 1290 SAS is clearly noticeable, but as described above, both advantages and disadvantages are noticeable.

The test motorcycle was kindly provided to us by Motorrad-Ruser from Haseldorf - thank you very much.