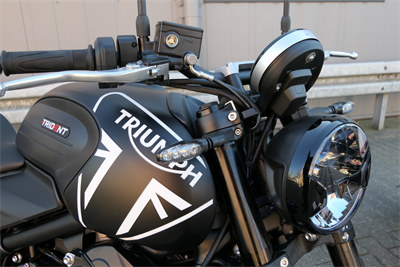 The new Triumph Trident 660 is a middle-class naked bike and is likely to mix it up. Compared to competitors such as the Yamaha MT-07, Suzuki SV 650 and Kawasaki Z 650, it offers a three-cylinder and costs 7,645 euros. We tested the new Trident 660 extensively and had a lot of fun.

So there it is in front of us, the new Trident 660. Looks rather small, the machine. But in terms of length, height, width and wheelbase, it is hardly different from its competitors. The weight of 189 kg, ready to drive, is neither particularly light nor particularly heavy. Nevertheless, it looks rather delicate. This may be due to the short stern and the short exhaust pot, which immediately catch our eye. One immediately suspects: It goes well around curves.

Also compared to the other Triumph Nakeds like .B the Street Triple S, the differences in dimensions are marginal. The seat height of very moderate 805 mm is very accommodating to smaller pilots. On this bike, no one will be afraid of not being able to get on the ground with their feet. Nevertheless, Dietmar, with a length of 1.84m, is still quite commodified on the Trident. The seat position is upright, the handlebars are medium width and quite high, you have the feeling of having the machine under control. The view to the back is also good thanks to larger mirrors - then it can go off. 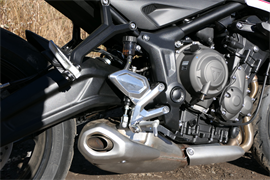 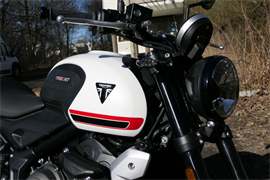 Before we venture onto the country road, we take a quick look at the cockpit. This is divided into two parts with the Trident 660: above, we see an inverse LC display with basic displays such as speed, tank filling and rev counter. In the lower half, the coloured TFT display shows us everything else - and that's quite a bit as standard!

The machine has Ride by Wire and the two driving modes Rain and Road, which influence the traction control and the throttle control (softer throttle response). The bike can be connected to the smartphone via an app. Then a navigation can be placed on the TFT and e.B. music can be played and phone calls can be accepted. The Trident is also possible to control a GoPro. Of course, the Trident also has a detailed on-board computer.

The lighting of the new Trident 660 is full LED incl. blinkers. Especially from behind, the machine looks rat-sharp. The manoeuvring of the machine is easy, but as with almost all Naked bikes, the handlebar impact is rather low. We prefer to lay the cloak of silence over the company. The passenger has hardly any space and at least as standard no handles. Instead, there's a strap - you feel like you're on a slingshot seat. Then hold on to the driver! Okay, with the Trident 660 you probably won't want to go through the Alps in pairs with a lot of luggage, so that's fine. 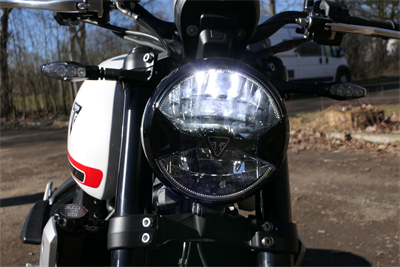 Now we're finally off. Magnificent, as the Triple already sounds in the stand gas. Like a wild horse, he seems to whisper to us, "Go man, give gas, I want to move forward." The sound gets even better at high speeds: Then the three-cylinder is literally full of pleasure, as if to tell us "Exactly, and now still inclined position". This reminds us very much of the Triple RS, although it seemed a little finer. But the Trident also travels precisely and almost by itself around the corners.
With 81 hp and 64 Nm of torque, the power is more than sufficient at any time. In road mode, the machine turns up quickly and willingly. And this with a very linear torque curve, so that there are no nasty surprises when accelerating. That sound - but we already had that. Trident feels almost even lighter than it is on the highway. It can be angled beautifully, there is no kink in the lens, which is probably also due to the excellent Michelin Road 5 tyres and the sporty Aluguss 17 inches.
At the front, the Triumph Trident has a double disc, which is not necessarily a given for lighter bikes. The braking performance is good, with a little manual force required for strong braking processes. The coupling force of the cable pull coupling, on the other hand, is hardly worth mentioning. The gearbox is triumph-typically butter-soft and precise. However, I would have liked the translation to take a little longer. You're nothing in the 6th gear in zero comma and you switch around a lot. Of course, in turn, the short translation benefits the acceleration: the machine goes up to 100 km/h in the second gear when it comes down to it.
By the way, the chassis of the Trident 660 comes from Showa. The fork at the front is not adjustable and has a travel of 120 mm. At the back, a central spring leg (also from Showa) with 133 mm travel is used, in which the spring base is adjustable. The suspension is a bit too soft in our opinion to the front and a tick too hard at the back. But this is a high level, the chassis feels very good overall and, as I said, very precise.

Fun! That is the key word that has stuck with us. The new Trident 660 feels like a down-ribbed street triple, but the gap isn't really big. The power of the 660 3-cylinder is impressive, but not scary. The whole bike is accessible, easy to ride and operate. You could almost say it's a perfect entry-level bike, but that doesn't do the Trident justice! It will also convince experienced bikers and is in the trend of downsizing, which is getting over more and more riders.

The Trident is available in the four colors "Crystal White", "Sapphire Black", "Matt Jet Black and Silver Ice" and "Silver Ice Diablo Red". The last two double colour variants cost 100 Euros extra. The machine can be equipped with various packages and accessories. There is also a Quickshifter (319 €), heating handles (235 €), A2 throttle kit (130 €) and various other parts(see configurator).

The test machine was kindly provided by the Triumph Flagship Store Q-Bike in Hamburg.

New registrations of the Trident 660

New registrations of the Trident 660