What can the SP do better than the standard MT-09? 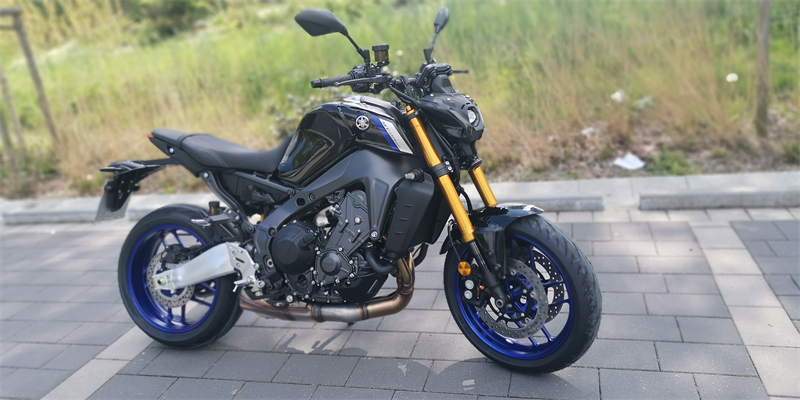 Photo: motorradtest.de
What can the Yamaha MT-09 SP do better than the 1,800 Euro cheaper MT-09 standard? What are the differences and is it worth spending the extra price on the more noble SP variant? Our test editor Dietmar takes a trip on the SP and describes his impressions.

This is how the

There it stands, the new SP. They are only available in a color called "Icon Performance". But not only does the paintwork distinguish them from the standard SP, the gold-anodized Kayaba USD fork as well as the shiny aluminium swingarm immediately catch the eye. And also the blue rims has only the SP. By the way, Yamaha has saved a lot of weight on the rims compared to the previous version, so that the 2021 SP weighs only 190 kg fully.

We really like the SP better than the normal MT-09, everything looks very classy and designed with love. Strangely enough, many MT fans don't seem to like the aluminium swing, because according to their opinion (see comments of our YouTube test) it does not fit into the picture of the otherwise dark grey frame and engine parts. We can't find it at all, on the contrary: the swinging ring in particular has a hyper-high-quality effect on us.

The other differences to the normal MT-09 are quickly enumerated: adjustable Öhlins strut with compensating container, more noble and comfortable bench, black milled lever and handlebars and cruise control in series. In summary: Better chassis and more noble appearance. Whether the 1,800 Euro surcharge is worth we will tell you further down after the test drive.

The Yamaha has also upgraded its technical system. However, this does not only apply to the SP, which comes along as well as the standard, apart from the cruise control. There are four driving modes, a 6-fold IMU with slant-dependent traction control, a small but easy-to-read TFT color display, and a QuickShifter that now works in both directions and butter-soft.

Also new is the lamp mask at the front with position lights and a single LED headlight, in which the high beam was also integrated. Apparently, this new headlight design polarizes, because here there is not only praise from the users.

In any case, the operation of the basic functions is easy, driving modes and traction control can be quickly adjusted with two switches on the left. The other menu functions, on the other hand, have to be set with a knotwheel wheel on the right, which is a bit more strenuous. 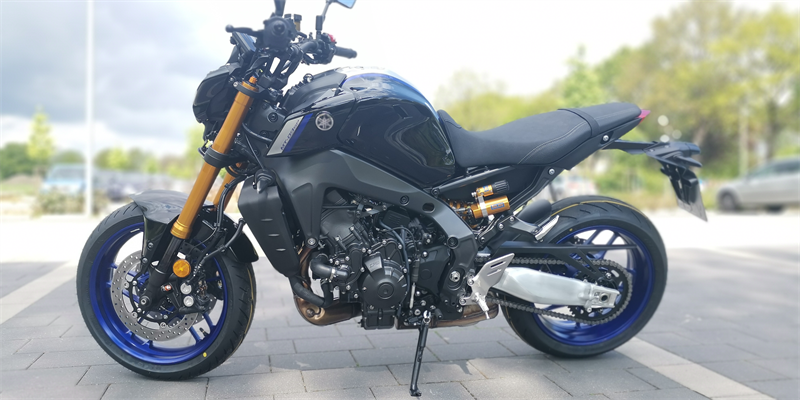 Then let's sit down - and don't notice any great changes compared to the standard MT-09. Seat height and ergonomics are identical, but the bench looks a little more comfortable on us. You sit upright in Streetfighter mode and thanks to the wide handlebars you think you have the machine under control immediately. Engine on and off!
The first thing we notice is the poisonous sound of the SP. Was that the case with the normal MT-09 two weeks ago? Probably already, but it feels and sounds wonderfully aggro again and so not at all after Euro-5. The underbody exhaust makes itself nicely small, but the triple is constantly present and when throttled it really nudes the driver and encourages to throttle (sound check on the top right).

Photo: motorradtest.de
When driving, we notice differences between the SP and the non-SP: the SP looks finer and more sensitive. This reminds us of the difference between a Triumph Street Triple RS and the normal Street Triple. Not that the standard models would be bad, but somehow it all seems a bit more valuable with the SP. And then this triple! MannMann, the machine goes off. One inevitably wonders why the Hyper-Nakeds with 180 hp and more are still there. The 119 hp of the MT-09 SP is enough and the torque of 93 Nm makes the machine cheer upwards from the basement like nothing good.
Brakes, chassis, acceleration, pull-through - all 1a. Overall, the Yamaha MT-09 SP has as much fun riding as on a few other Naked bikes. It goes absolutely precise through curves and does not annoy with load-changing reactions or constant driving jerks or anything else. It's just fun!

Back to the exit question: Is the 1,800 Euro surcharge for the SP worthwhile? Jein, one might say. The SP is the slightly more noble and chassis-technically better machine, but if you don't have it so thick, we think you can also use the standard MT-09.

However, the competition for the naked bikes of the upper middle class is tough: KTM 890 Duke R, Kawasaki Z900, Ducati Monster, Aprilia Tuono 660, Triumph Speed Triple RS - these are all also great machines. In the end, many potential buyers will probably depend on the engine: it's just a character question whether you're on Twin, Triple or In-line fours.

In any case, the MT-09 SP does quite a lot of right and actually nothing wrong - except for the company operation, which is, however, similarly murky among the competitors. But as a couple you don't really want to ride these bikes, don't you?

The test bike was provided to us by Tecius & Reimers in Hamburg Eidelstedt - thank you.