Photos: Suzuki (factory)
Is the new Suzuki GSX-S 1000 vintage 2021 as claimed by Suzuki actually a completely new machine or rather a facelift? We climbed up and did a few laps. Whether facelift or not - we were thrilled with the naked bike with the legendary K5 row quad.

Visually, the new GSX-S 1000 is definitely a real eye-catcher compared to the predecessor model. We like the angular design and the light mask with the LED lights. No matter from which side you look at the machine, it always looks like power and muscles - except from behind.

The seat test is also pleasing. Due to the moderate seat height of 810 mm, you sit deeply integrated into the machine. So it works even for smaller people with the safe stand. The footpeas are relatively high and a little offset backwards. For Dietmar with his long hooks, this results in a rather sharp knee angle and the whole thing smells strongly of a super sportsman without disguise.
The pillion operation is as almost always with naked bikes sobering. There is little space and few handles. The high passenger seat allows the passenger to look over the driver's helmet, but at the same time you feel like a launch pad. Let's put it so nicely: Enough for the dredging lake, but from Hamburg to Munich it will be a strain for two.
The Suzuki GSX-S 1000 is available in the three colours blue, grey and black. 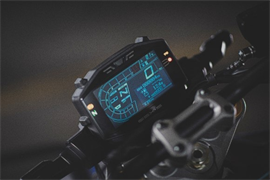 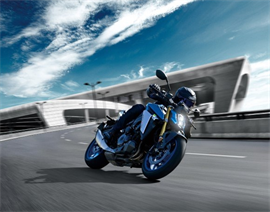 Technically, the new GSX-S 1000 has now reached the cutting point of view, but without being able to set any highlights. There is ride-by-wire with three driving modes, 5-way adjustable traction control, low RPM assist, a well-functioning anti-hopping clutch, suzuki jump start "Easy Start" and a really smooth quick shifter with blipper function. These things are all in series at no extra charge on board, not bad.
But there are also a few things that do not exist with the GSX: Wheelie control, lean angle sensors, cornering ABS and a modern cockpit will probably be reserved for the next version. Before anyone complains: At 12,900 euros, the GSX also costs significantly less than its comparable competitors. Nevertheless, the display is an imposition: Much too dark and much too small, so you prefer to look at the street. And that's exactly where we want to go now and tickle the K5. 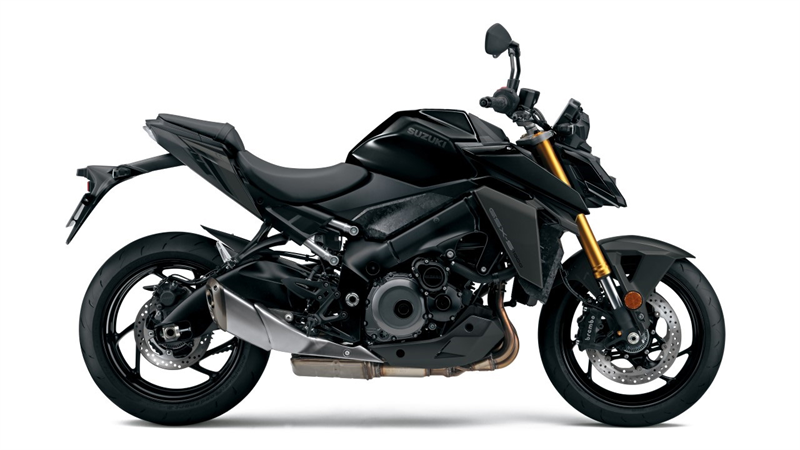 The 999 cc engine is an old acquaintance, which despite Euro 5 still sounds wonderfully oozing. A little rough, almost hoarse, it screams when you move the throttle down. You can almost hear what awaits you right away - wonderful!
And the sound didn't promise too much. In fact, the machine goes off like the devil. Typical for a row four, there is enough steam from below, which moves almost linearly like clockwork. From 8,000 rpm, there is then another look-up until the machine reaches its maximum output of 152 hp at 11,000 rpm. This is impressive, but we find even more impressive the manners of the K5 in the lower speed ranges. No jerking and twitching, no grumbling - with the machine you can also twitch through the village at 40 km/h in fifth gear.
The Brembos pack neatly without achieving the bite of an M50 monoblock. The dosing is okay and the ABS control range is nice and short. Radially mounted 4-piston fixed calipers work on a 310 mm double disc at the front, a 1-piston fixed caliper on a 250 mm single disc at the rear.
The chassis gives decent feedback on the fork and is sportily taut, without it annoying. It is set just right for our taste, but can still be adjusted in damping and spring base if necessary. Very nice is the aluminum bridge frame and the black painted Superbike swingarm, also made of aluminum. The weight is full at 214 kg, which is also fine.

The Suzuki GSX-S 1000 is a typical Suzuki. She is well done, but has no highlights on board that would make her take off in particular. The technology is pleasantly down-to-earth compared to the competitors, not even the smartphone can be paired! We don't miss anything here, the most important technical helpers such as .B. a multi-stage traction control are included.

Once again, we would like to highlight the really excellently functioning QuickShifter, which invites the driver to let his hands off the clutch. The competitors BMW S1000R, Ducati Monster 1200 S and Yamaha MT10 are significantly more expensive than the Suzi. Only the Honda CB1000R is priced at eye level. All of these naked bikes have one thing in general: riding with them on country roads is a hell of a lot of fun. Well done, Suzuki!

The test machine was kindly provided to us by Bergmann & Söhne in Tornesch. There she stands as a demonstrator and is looking forward to more test drivers...

New registrations of the GSX-S 1000

New registrations of the GSX-S 1000