Attack from England on the BMW GS: Successful or unsuccessful? 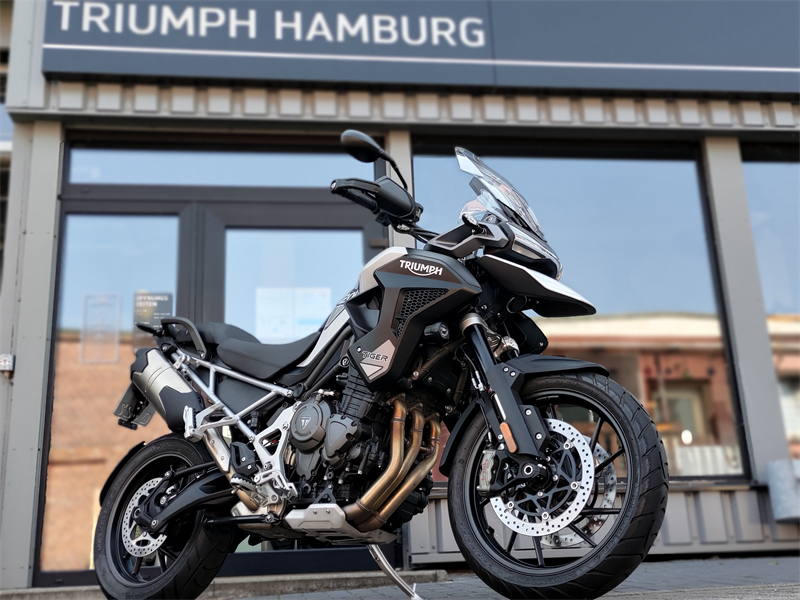 Photos: Motorradtest.de
With the new Tiger 1200, Triumph reaches for the crown of large enduros. Quite unabashedly and without further ado, Triumph speaks of the attack on the GS. And indeed, there are many similarities between the bestseller from Munich and the new tigress. Markus and Dietmar feel the Tiger 1200 GT Pro on the tooth.

There it is, beautifully draped, in front of the flagship store of Q-Bike Triumph in Hamburg: The new Tiger 1200 in white. There are three road-oriented GTs and two off-road rally versions with 21" front wheel. As an Explorer version, the Tiger 1200 has a 30-liter tank. Our test bike GT Pro has a 20 litre tank and is praised by Triumph as an "adventure model with touring capability and comfort for crossing entire continents". The GT Pro is also available in blue and black. Dietmar finds this color selection a bit boring, but in black it looks quite sharp - Markus thinks.

From the side, you could actually confuse the Triumph with a GS. Is that intentional? Beak at the front, bolted rear frame made of aluminum, side-mounted rear wheel cover and above all the fairing at the front - this can not be a coincidence. We shall be fine with both machines.
Even more striking are the similarities when sitting up. The seat height is variably adjustable to 850 or 870 mm. The co-driver in particular is happy about endless space. There are reasonable grab handles and of course heated seating furniture in the accessories for set for 429 euros. You sit super comfortable, upright and immediately have the feeling of being able to drive through entire continents. 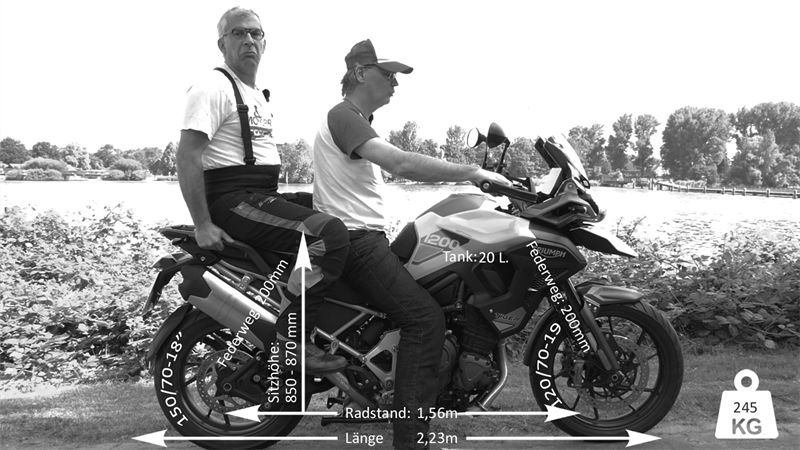 Extremely relaxed progress on the Tiger 1200 guarantees triumph for driver and co-driver. 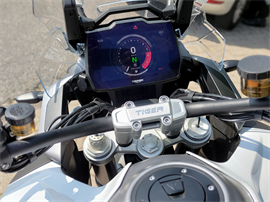 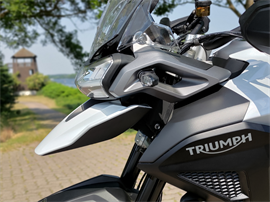 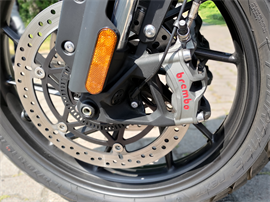 Technology of the Tiger 1200 GT Pro

Compared to the GT for 17,750 euros, the GT Pro for 19,950 euros in series has a few more gimmicks on board: heated grips, cruise control, hill start assist, additional headlights, center stand and a very good QuickShifter. The dealer told us that hardly anyone buys a GT and everyone wants the GT Pro.

The technical gaming and assistance systems also bring tears to your eyes: 7" TFT color display with navigation system connection via mobile phone, 6-axis IMU with cornering ABS and multiple traction control, Keyless Go, GoPro control and of course many driving modes that you can adapt to your own needs - in addition to Rider mode, which you completely preconfigured for yourself.

All this happens with the 5-fold joystick already known from other Triumph bikes as well as some direct selection buttons, e.g. for the riding modes, the heated grips, the fog lights and the switching between LED daytime running lights and low beams. Speaking of light: Full LED is self-singing and cornering lights are also standard on the GT Pro. And especially from the front, we find the light mask design much fresher than its predecessor.

The machine is therefore crammed full of technology, but it is still easy to operate. Very helpful is also the fact that you can choose which information is displayed in addition to the standard displays while driving, e.g. the consumption information. All 1200cc Tigers also have a semi-active, electronically adjustable landing gear from Showa. The bike automatically detects the load status and automatically adjusts the spring base and damping accordingly. The rider can adjust the rebound and compression steps front and rear in many levels from comfort (soft) to sport (hard). 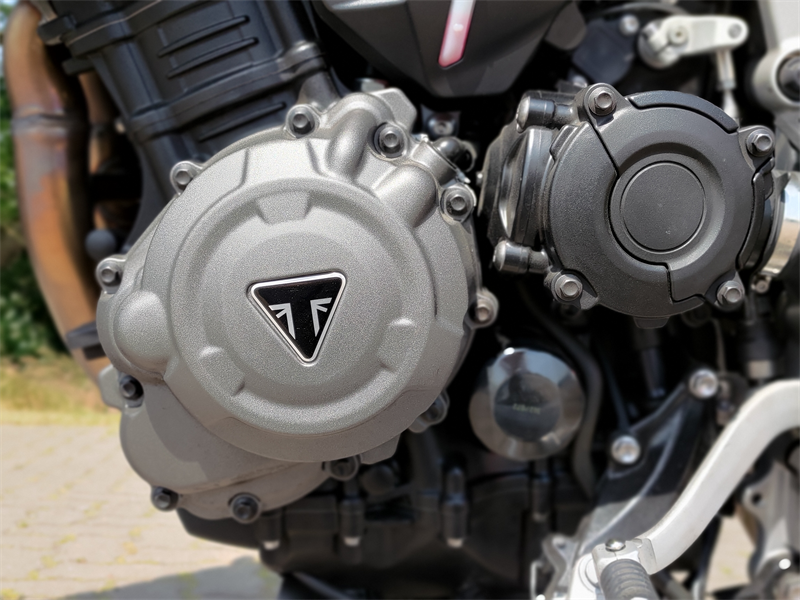 Then we do a few laps in and around Hamburg and on the motorway in the best weather. The windscreen is adjustable with one hand and also while driving and provides good wind protection. Due to the fairing and additional flaps, the Tiger also offers good weather protection overall. The machine weighs 245 kg ready to drive, but feels lighter. Compared to the predecessor model, Triumph has saved a whopping 25 kg adjusted for equipment. This is noticeably good for the bike, it is easy to direct and makes an almost playful impression for a large enduro.
The brake system does a really good job. You hardly need any hand strength to make the Brembos bite biting. The radial pump from Magura seems to harmonize perfectly with the M4.30 monoblock. At first you brake a bit too hard because of this brake line, but after a short acclimatization it also fits with the dosage. 1 with asterisk for the horseflies of the tigers! Everything else works splendidly on this bike, especially the fluffy QuickShifter with blipper function. The Metzeler Tourance Next are also a good choice for the road.
So no criticism of the Tiger 1200? But of course, we always find something. In this case, it is smaller load change reactions that the triple generates in interaction with the gimbals. There are small jerks when accelerating as well as when taking off the gas. But that also depends on the driving mode and it didn't really bother us. Second criticism: You can put an arrow navigation on the cockpit, but a correct map display is unfortunately not possible - too bad. 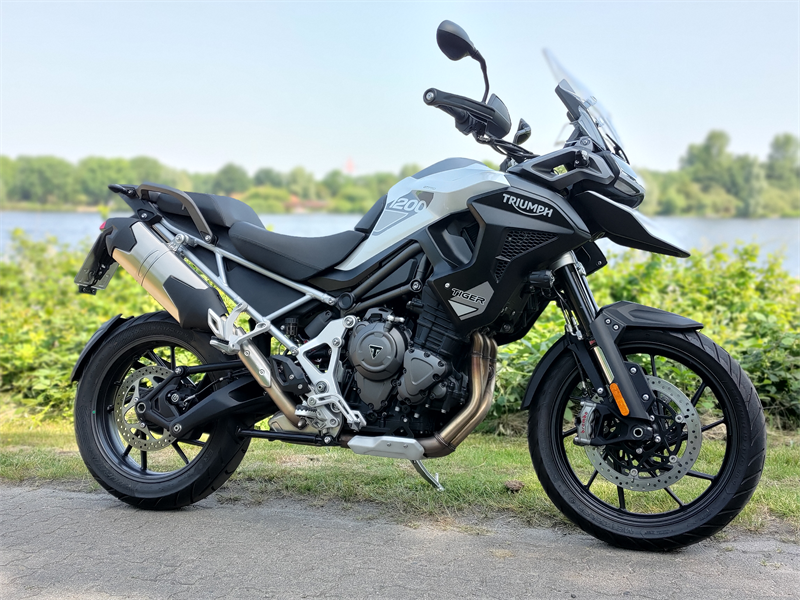 So, then we finally come to the heart of the tigers, the engine. The sound is perfect: clearly audible while driving and gassing and then roaring like a deer in the rutting season. Nevertheless, there are only 92 dB in the glow - very good. The engine goes forward brutally, there are always power reserves in abundance. We've gotten used to this with big enduros, but it's always an experience to get the big Triumph triple on track. In contrast to the Speed Triple 1200 RS, the Tiger is a little more merciful with the driver, but still: If you want, it goes to the point - but really! No wonder with 150 hp and 130 Nm of torque.
Compared to the GS, the performance comes a bit later, but then even more vehemently. However, the Tiger is also less thirsty with 5.7 liters per 100 km / h, accordingly, the range is 50 km lower with 350 km. In our opinion, the comparison between the Tiger and the GS can be reduced to the engine. Boxer vs. Triple - who wins the race here? Is the Tiger the better bike overall? No. Is the GS better? No. Seriously, our internal tuning is 1:1, they are just both super cool machines. As I said, you can clearly see that Triumph has unabashedly copied from the GS - and on the data sheet then often a bit better than the BMW. But in practice, these differences are hardly noticeable, which is nothing else a big, fat praise for Hinckley!
>>> comparison Triumph Tiger 1200 GT Pro vs. BMW R 1250 GS <<<
Triumph gives a four-year warranty on the Tiger 1200 without mileage limit, the service interval is 16,000 km. Let's briefly compare the prices of GS and Tiger: If you configure the BMW so that both bikes are about equally well equipped, you end up with about 21,500 €. So the Tiger has a small price advantage, although such comparisons are of course always a bit limping. If you have longer tours in mind, you will probably order the case system with top case and mounting accessories from Triumph for just under 2,000 euros. Both subjects are not really cheap!

The new Tiger 1200 is an extremely successful update. Triumph has itself to blame for the constant comparisons to the GS - the intention to set up a comparable machine is too clear. And as I have already said several times: We succeeded! The new Tiger has hardly any weaknesses, drives great and turns out to be an all-rounder. We are sure: If you actually like GS, but want to ride something different, you will end up with the Brit. If only because there are hardly any other adventure bikes with cardan shaft drive.

The test bike was provided to us by Triumph-Hamburg for this test. Thanks also - I can't sleep properly since then. Now the whole thing in red and I'm due!
Vergleiche die
Triumph Tiger 1200 GT Pro
mit anderen Motorrädern