Test of the deadly two-cylinder retro bike from Kawasaki 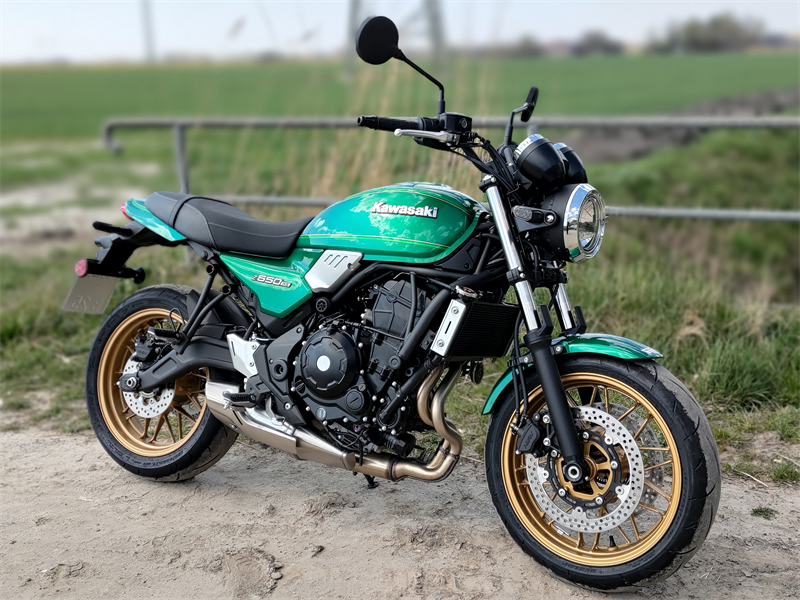 Photos: motorradtest.de
With the new Z 650 RS, Kawasaki is expanding its "Modern Classic" segment this year with an inexpensive machine. The Z650RS is, so to speak, the little sister of the successful Z900RS and hits retro fans thanks to the look of the 70s right in the heart. We were allowed to do a few laps and describe our impressions here.

This is how the Kawasaki Z 650 RS stands

A little anecdote at the beginning: We were a bit disappointed when we found the grey version cleaned at Heller & Soltau for testing and ready for testing. No matter, turn to work and intro - and then Ingo Heller comes around the corner with the key and we realize together: This is a throttled A2 variant with 35kw. The open one is still in the shop - AND THAT'S THE GREEN ONE, HOORAY! You can usually argue about taste, but in this case there are no two opinions. The green Z650RS is by far the most beautiful. There is still a gray and a black variant, but as I said: The green one with the golden rims easily puts all two in the shade. The usually tricky color selection is obsolete with this bike. Take green, period.

Compared to the larger Z 900 RS, Kawasaki has not implemented the retro theme quite as consistently here. For example, the engine has no decorative ribs, the exhaust is more reminiscent of a Streetfighter and there are unfortunately no spoke wheels. However, Kawa has very cleverly sent golden cast rims "in spoke design" to the start of the green version, we like it great. The drop tank is very nicely implemented, but holds only 12 liters. The logos on the side are also really well made, not just glued on, but like in the past real plaques with 3D effect. The look is clearly one of the strengths of the Z650RS.

The seat test is also really good. You sit upright, the handlebars are high and slightly inclined towards the rider. The seat is narrow at the front and widens towards the back, providing a very comfortable seat. The seat height is 820 mm. A good compromise for smaller and larger pilots. Even the passenger does not sit badly. Fortunately, there are also grab handles in the Kawasaki accessories. If you often ride in pairs, you should treat yourself to this, otherwise the passenger / pillion must hold on to the belt or the driver. 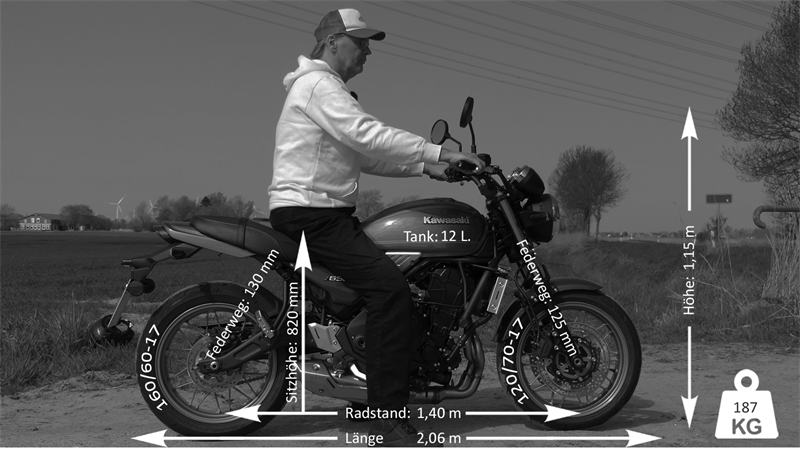 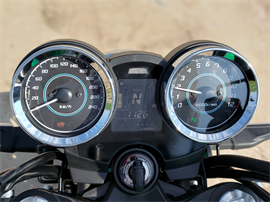 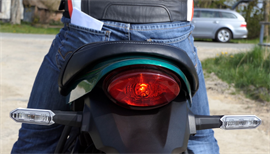 The technology of the Kawasaki Z 650 RS is manageable. In addition to a normal ABS, there are no technical driving aids. That doesn't bother us much, especially on a retro bike, mobile phone connectivity, GoPro control, keyless go and wheelie control have no place in our opinion. A traction control might have been quite nice for safety reasons, but that is also missing here.

On the other hand, the two analogue round instruments for speed and rpm immediately catch the eye. In between, Kawasaki positions an inverted LC display with on-board computer, gear indicator and fuel indicator. Very nice, only the most necessary, nothing that would distract you while cruising. The operation of the machine is correspondingly simple, you have the bike under control after one minute.

Well done is the lighting system of the Z650RS. All lights including the turn signals enjoy the modern LED technology, but optically both the round headlight and the rear light come in classic optics. 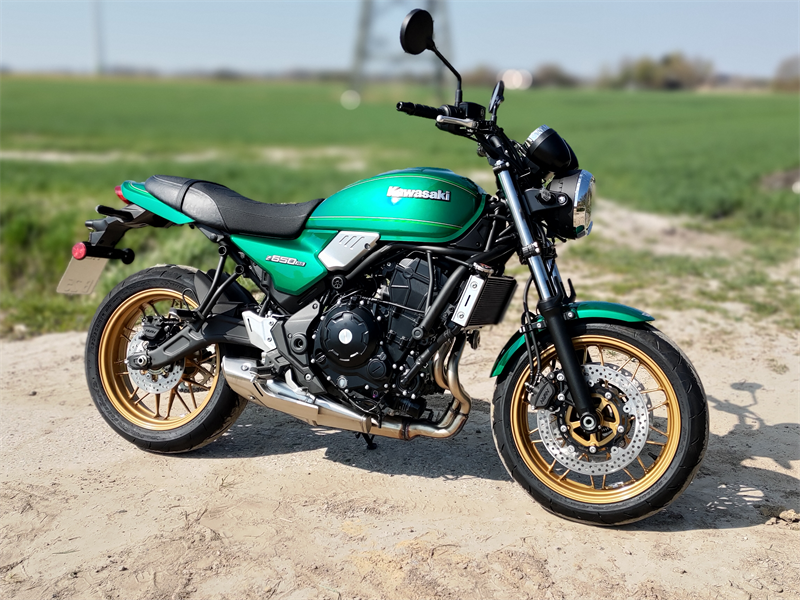 Before we set off, we take a quick look at the landing gear. The conventional 41mm front fork is not adjustable and even with the half-lying central strut at the rear you can only adjust the preload. The spring travel is 125mm at the front and 130mm at the rear. There is a matt black lacquered tubular steel frame and a beautifully made banana two-arm swingarm. Dunlop Sportmax Roadsport 2 is used as standard tyres. The ABS brake system is provided by Nissin: At the front there are two semi-floating double discs with 300mm diameter and two axially mounted double piston calipers and at the rear there is a smaller 220mm single disc with single-piston floating caliper. The brakes work really well, especially at the front it is snappy and emphatic if necessary.
Of course, the braking performance also benefits from the low weight of only 187 kg ready to drive. However, this is not only positive when braking, but of course also when swinging corners. It's wonderful how willingly the Kawa turns in and lets herself be thrown from one curve to the next.

We already know the engine of the RS from the naked Z 650. It was taken over unchanged and makes 68 hp at 8,000 rpm and 64 Nm at 6,700 rpm. That's enough for brisk performance on country roads and lots of driving fun. Of course, the two-cylinder does not come close to the insane pressure of the Z900RS, but the engine characteristics fit almost better to a retro bike than the four-cylinder of the big sister. Also the sound is fine. You can chug quietly through the area, but when you turn the throttle, it booms emphatically from the short underfloor exhaust. Not bad for a six-fuffziger.
The assist slip clutch with anti-hopping function also deserves a special mention. It enables fluffy shifting and prevents stamping when downshifting. The hand force on the clutch lever, which can be adjusted in range, is close to zero. This makes shifting the well-designed and precisely shiftable 6-speed transmission really fun.

The Kawasaki Z 650 RS actually drove straight into our hearts. Nice that Kawasaki now offers the retro theme in a 2-cylinder with manageable performance at a fair price. So even novice drivers and lighter pilots will like to approach the topic of retro. But this does not mean that the Z650RS is not for old hands - on the contrary! There will definitely be many experienced bikers out there who are only too happy to get off their 250+ kilo monster and get on this light and really nice bike to ride.

The test bike was kindly provided by Heller & Soltau in St. Michaelisdonn. If you want to take a test drive or are interested in another Kawasaki (or Husqvarna), you should definitely consider a small trip to Dithmarschen. Beautiful country roads and a good coffee (!) await you.