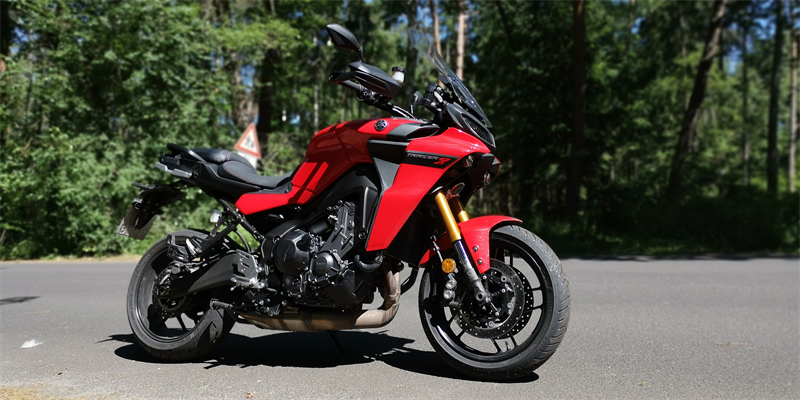 Photo: motorradtest.de
The Yamaha Tracer 9 GT is the successor to the Tracer 900 GT. Unlike many other 2021 facelifts, not only the Euro 5 homologation was carried out, but almost a completely new bike was set up. You can find out what updates the Tracer 9 GT has received and how it drives in this test.

The list of innovations in the Tracer 9 GT is really long: The engine has 4 hp of extra power and 5 Nm more torque is of course trimmed to Euro-5. The displacement has increased by 42 cc to 889 cc. There is a new frame, whereby the steering head has moved slightly backwards, but the swingarm has been extended by 14 mm - which should result in a more stable handling and better straight-line running.
>>> Comparison Yamaha Tracer 9 GT vs. Yamaha Tracer 900 GT
Really great: handlebars, footpebeds, windshield and bench are adjustable. So the Tracer 9 GT can be adapted to pretty much all people. The seat has been made a bit wider, especially for pillion, good for longer tours with passengers. Of course, the technology in particular has been properly saddled up: Two-part TFT display, the 6-fold IMU with lean angle control controls cornering ABS, traction control and wheelie and slide control, and the GT variant also has a semi-active chassis on board. The cruise control is now just as standard on the GT as the well-functioning QuickShifter (now up & down) and the heated grips. In other words, the Tracer 9 GT lacks nothing.

The two-piece TFT display looks impressive at first, but we still don't want to get really excited. In contrast to the displays from KTM & BMW, for example, the displays are quite small. But that's complaining at a high level, the cockpit of the 9 GT is already a big step forward compared to its predecessor.

However, the operation with the pushable wheel switch on the right is a bit fiddly. The printing function is difficult, but turning is too smooth. This leads to the fact that you often call an unwanted function. Better are the two switches on the left side, with which you can easily and understandably adjust the four driving modes and the traction control.

The lighting is completely LED and the lamp mask at the front is not as cyclops-like as on the MT-09. The GT even has cornering lights as standard on board, a commendable feature for frequent drivers. 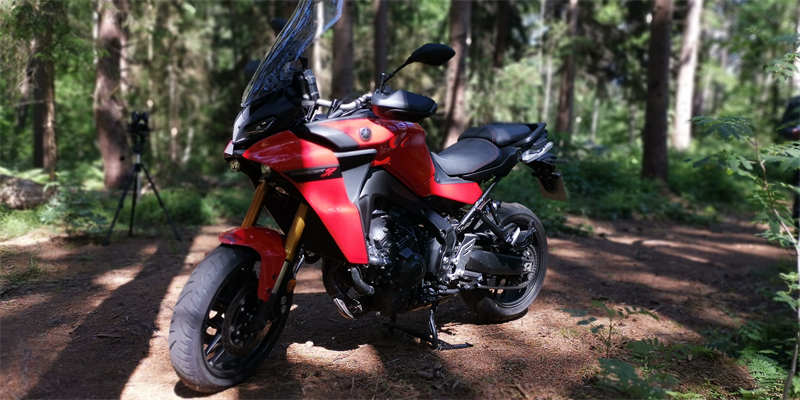 As expected, the seat test is positive. The driver and front passenger have plenty of space, with the seat height being set to either 810 mm or 825 mm. The older Tracer 900 GT was significantly higher here with 850 mm. You sit on the new Tracer 9 GT rather in than on the machine. The upright seating position and the wide handlebars immediately give the rider an adventure bike feeling and full control. The moderate weight of 220 kg when fully fuelled makes the GT appear very manoeuvrable even in the first few metres. Compared to "big" travel enduros, everything looks a bit smaller and therefore more handy.

And then this sound! Wonderful, as the triple when accelerating hisses and hisses. Again, a clear demarcation point to normal adventure bikes, which often come along 2-cylindrous and radiate a certain calmness. The Yamaha, on the other hand, is more of a sporty driving style, although the engine also makes chill gliding possible. Accelerating from low revs in high gear: No problem, he does. At 5,000 in the 2nd again orgentlich add: Also welcome. The triple never seems strained or overwhelmed, the 119 hp are always fully there. No load changes, hardly any constant jerks, super fine throttle response, everything great. If desired, the four driving modes also allow less direct throttle response, e.B. in rain or slippery surfaces. 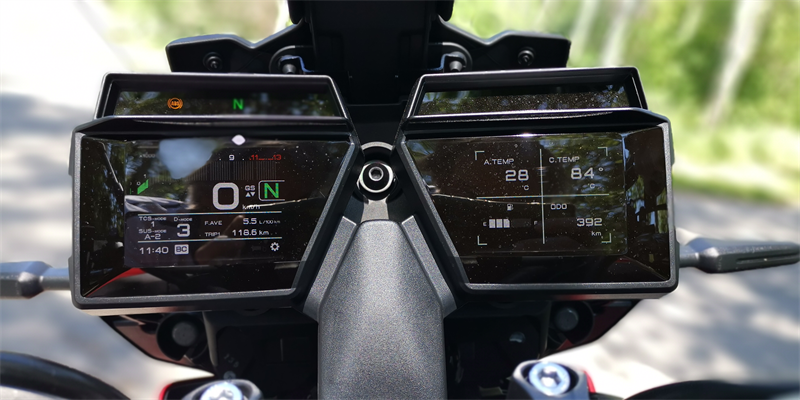 The Tracer 9 GT is a really good development of the already good Tracer 900 GT. Although it became 1,500 euros more expensive, it has also increased technically. The well-functioning semi-active chassis alone justifies the extra charge.

Also justified is the surcharge of the GT compared to the Standard Tracer 9. Although it costs 1,500 euros less than the GT, you also have to do without many delicious things such as suitcase, QuickShifter, semi-active suspension and cornering lights. If you add these features together, you have to wonder why the price gap is not larger. Clearly, the GT is the better deal!

The test bike was provided to us by Motorrad-Ruser from Haseldorf - thank you very much.
Vergleiche die
Yamaha Tracer 9 GT
mit anderen Motorrädern