A legend is celebrated

07.03.2021
When Yamaha launched the first TMAX in 2001, it turned the two-wheeled world upside down. He combined the performance of a motorcycle with the comfort of a scooter. This dynamic sport scooter has changed the lives of hundreds of thousands of riders across Europe. 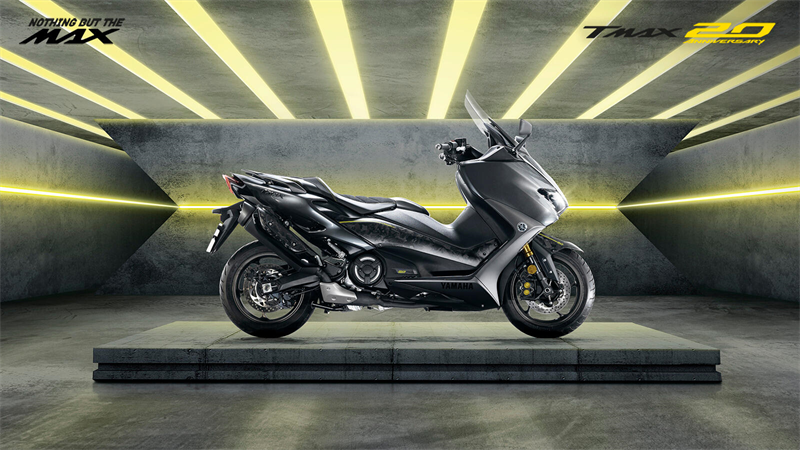 Photos: YAMAHA
Since its launch, the TMAX has become the best-selling sports scooter in Europe every year and has earned a truly legendary status. With almost 300,000 units sold in Europe, the TMAX is by far the most successful sports scooter ever produced – and one of the most important models on Yamaha's offering. To celebrate this, Yamaha has created a special model two decades after the introduction of the first TMAX.

With exclusive features and a unique new color, the TMAX 20th Anniversary celebrates the continued success of the world's most successful sports scooter. TMAX lovers thus have the opportunity to call this ultimate execution their own.

TMAX: Only the MAXimum counts

Before the introduction of the TMAX, one had to decide: a scooter with a small displacement or a motorcycle with gear shift. Both were fine – but the perfect solution for commuters and leisure drivers was different. There was a lack of a machine that combined the simplicity of an automatic scooter and the exciting riding characteristics of a sports motorcycle.

Yamaha engineers recognized this gap in the market and began the project to build the world's fastest scooter in the late 1990s. Once again Yamaha broke with conventions and created a completely new kind of hybrid two-wheeler. It combined the advanced engine and chassis technologies from the motorcycle sector with the simple and comfortable features of a scooter.

The rest is history. With the introduction of the innovative maxi scooter in 2001, the European market was presented with something unprecedented that made commuting faster, easier and more entertaining than ever before. The TMAX was ahead of its time – it didn't fit into any category. That's why Yamaha created the "Sport Scooter" class, which has since become the most important segment in the scooter sector.

20 Years of TMAX: Evolution of a Legend

Throughout its history, the TMAX has evolved to meet the needs and desires of drivers.

Powered by a 500 cc two-cylinder engine with a top speed of 160 km/h, the first generation of the TMAX 2001 was the first real sport scooter. It offered a new level of stability at high speeds, making it the ideal vehicle for customers who needed a fast, comfortable and easy-to-use scooter for longer commutes.

In 2004, the performance of the 2nd generation TMAX was taken to the next level by the introduction of a stronger injection engine. At the same time, the driving quality has been improved by a new telefork and double disc brakes at the front, optionally with ABS. He also received a parking brake and a larger 15" rear wheel.

The 3rd generation of the TMAX followed in 2008 with a completely new design. The driving characteristics were further improved by a new strong and light cast aluminium frame, a 15" front wheel and a 2 mm larger diameter of the fork tubes (43 mm).

In 2012, the 4th generation of the TMAX was launched. The heart of the Sport Scooter got more displacement: the new engine had 530 cc. In addition, the TMAX featured a belt drive and a new aluminum swingarm, which reduced the unsprung masses and thus further improved the handling.

The 5th generation of the TMAX came in 2015 to some features that made it even more like a motorcycle: an upside-down fork and radially mounted brake calipers.

In 2017, the 6th generation of the TMAX came onto the market with a dynamic new look and a range of sophisticated electronic driving aids. Equipment included electronic throttle control (YCC-T) and traction control (TCS). The even more comprehensively equipped SX version also had selectable power modes (D-MODE) – while the DX version was additionally equipped with cruise control system, seat and handle heating and an electrically adjustable windshield.

In 2020, the most dynamic and powerful TMAX of all time was introduced. The new, sporty body in combination with the more powerful 560 cc engine opened up completely new possibilities for the TMAX and underpinned its status as a top model.

In homage to the outstanding success of the TMAX over the past two decades, Yamaha presents the new TMAX 20th Anniversary. Only 560 numbered specimens are built. The series is therefore one of Yamaha's most exclusive special editions, which is certainly appreciated by TMAX drivers and enthusiasts all over Europe.

The main feature of this new model is the Forged Carbon fairing parts, which give each scooter its unique, individual "fingerprint". Unlike conventional carbon fiber, which has a uniform fabric pattern, each forged carbon part has a unique look, as used in the TMAX 20th Anniversary. As a result, each of the 560 copies becomes an absolute one-of-a-kind.

The distinctive cladding parts as well as the front wheel cover and the heat shield of the silencer are made of this strong and light carbon fiber material. Yellow details on the side panel and front wheel cover are reminiscent of the bright yellow colour scheme of the original model.

The heated seat is made of high-quality materials and provided with yellow seams that complement the yellow details of the cladding. A 20th Anniversary logo underlines the exclusive status of the scooter. The special model also comes standard with heated handles, whose special look further enhances the equipment.

Each TMAX 20th Anniversary also has a unique number that identifies it as one of the 560 special models. Together with the individual "fingerprint" of the Forged Carbon parts, each unit is given its own identity.

This exclusive TMAX model is painted in the special color Tech Graphite color, which expresses the dynamic appearance of this very special scooter. Bronze rims underline the premium status.

The new Yamaha TMAX 20th Anniversary will only be available through an online ordering system that will go live on March 31, 2021. Further details will be announced shortly.
Open
Close
Photo: YAMAHA