Full throttle with the Speed Triple 1200 RS in Oschersleben!

The Triumph Media Day took place this year in Oschersleben. Good for us, because a) the race track near Magdeburg is not too far away and b) we were able to try out the new Triumph Speed Triple 1200 RS on a real race! No oncoming traffic, no speed limit, no nothing at all!
Before we get to our impressions of the new Speedy, a brief overview of the triumph media day 2021. About 25 journalists were invited this year, about half met the night before in the hotel for steak and beer. This started really well and our editor Dietmar was already able to make first contacts with the bloggers Rainer (kraftrad.com) and Thomas (motor8.de). It quickly became clear that there were real racetrack burners on board here - in contrast to Dietmar, who was allowed to accelerate for the first time in Oschersleben. 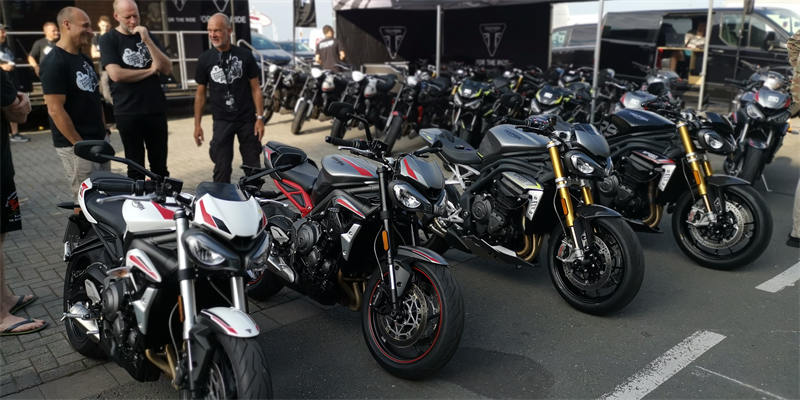 On Monday it was already at 08.00 clock in the pit lane 1 to 3 to the point. Welcome, group classification, addressing the race management and off to the track. Dietmar had reserved a Speed Triple 1200 RS for the racetrack in the morning and a Bonneville Bobber for the country road in the afternoon. The Triumph technical team consisting of three people took care of the setting and tires of the bikes and so nothing stood in the way of the pleasure - except for the fact that GoPros were forbidden on the helmet! Shocking distress - fortunately Dietmar was allowed to use the 360-degree Insta permanently installed on the bike (see video part 1 below).

Five instructors now went to the racetrack with the participants in three turns. And here the new Speedy showed what it can do! More than 10 kilos lighter than its predecessor, 180 instead of 150 hp and rich torque (125 Nm) let this power naked fly around the curves. In an interview with Uli Bonsels, the press spokesman of Triumph Germany, we learned that the Speed Triple 1200 RS is more or less a completely new bike: engine, frame, brakes and of course electronics - all new.
Especially the combination of extra power and lower weight is clearly noticeable. The new Speed Triple RS drives almost as casually as a Street Triple - only with noticeably more steam, especially in the medium speed range. 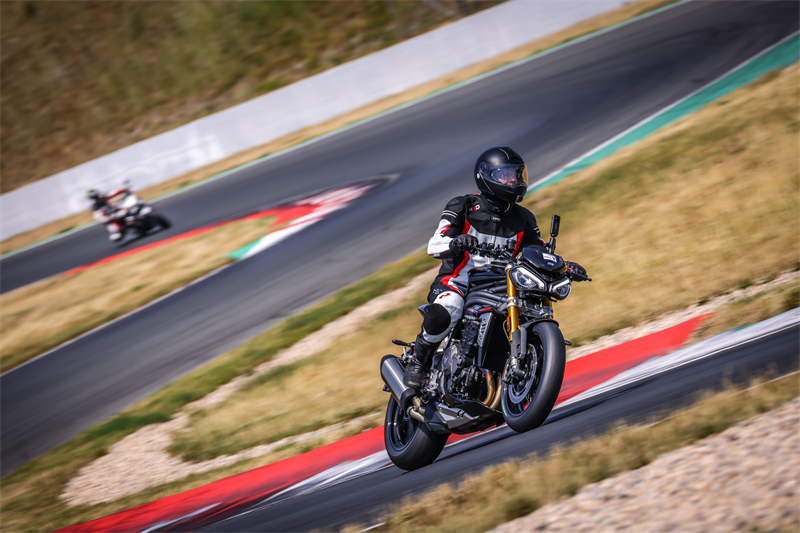 A detailed review of the Triumph Speed Triple 1200 RS will follow in the next few days. Here we want to leave it at our first driving impressions: We have not had as much fun as with the new Speedy for a long time!

Since I was only the last to be happy about the food during the lunch break, my personal schedule got a bit confused. The country road trip should start already at 14.00h, so unfortunately I could not with. But it didn't matter, after all, such a bobber can also be moved comfortably alone on the country road. As I heard from my colleagues in the evening, the country road ride was anything but comfortable, I would probably have flown off the bike anyway.

So complete rest for an extensive test drive on the new Bonneville Bobber. And what a difference to the curve rush on the Speedy! Just sitting up, my pulse has fallen by at least 20 beats. Lazy seating position, footpes not quite as far forward as expected, wide handlebars, deep saddle (690 mm seat height) and the wonderful geblubber of the 1200 Bonneville Twin!

Again, I save myself detailed assessments, because a detailed test will also follow for the Bonneville Bobber. Short conclusion: I was not so relaxed on a motorcycle for a long time. If you are interested in the Bonneville Bobbers, it is best to watch the second part of our Triumph Media Day video (see below).

In the evening we go back to the hotel to eat and watch football together. Triumph Media Day 2021 was an excellently organized and interesting event. Each participant was able to test drive virtually all current bikes and also talk shop with many colleagues. The focus was clearly on the new Speed Triple and its racetrack qualities, but there was also enough space and time for other topics. Gladly again!