What can the Scram 411 do and what are the differences to the Himalayan? 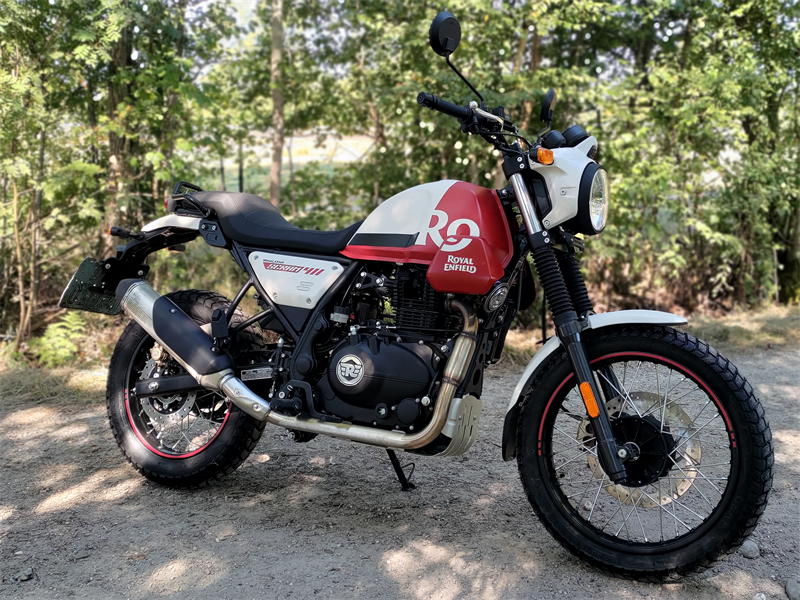 With the Scram 411, Royal Enfield presents a modified Himalayan as a Scrambler bike for less than 5,000 euros on the road. Markus and Dietmar have checked out where the differences between the Scram 411 and the Himalayan lie and how the newer Scram 411 compares.

First positive surprise: The Scram 411 looks great, as it stands at 2Rad Stadie, our Royal Enfield dealer in Pinneberg. Due to the missing disc, the 19 inch front wheel and the coarse tires (by the way from CEAT, an Indian manufacturer), an adventure bike actually becomes a scrambler, at least visually.
Other differences to the Himalayan include a slightly different cockpit and slightly shortened spring travel. Everything else is like the Himalayan, but the Scram 411 has to do without the practical luggage rack. Instead, there are sturdy grab handles for the passenger, to which you can of course also attach a luggage roll.
The Royal Enfield Scram 411 is available in five colours. We had the very nice white-red version ("White-Flame") available for testing. They are also available in silver-black and in three shades of grey. No matter which color combination you choose, the Scram 411 always looks good. The gray versions cost a cheap 4,990 euros, the two-color versions are available for 5,190 euros. 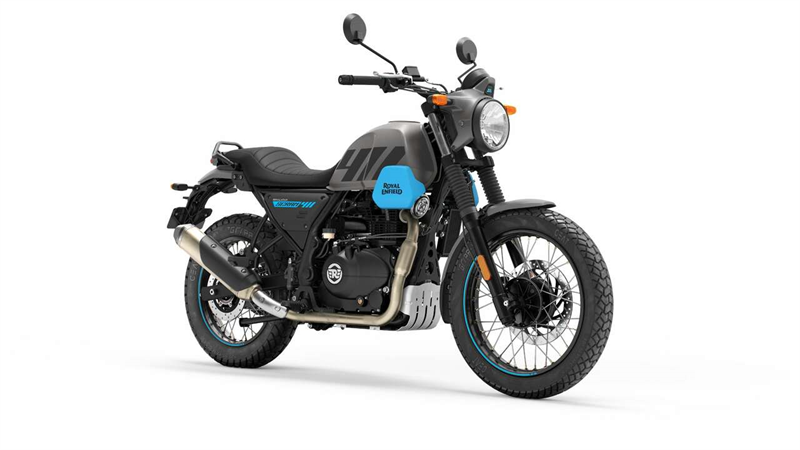 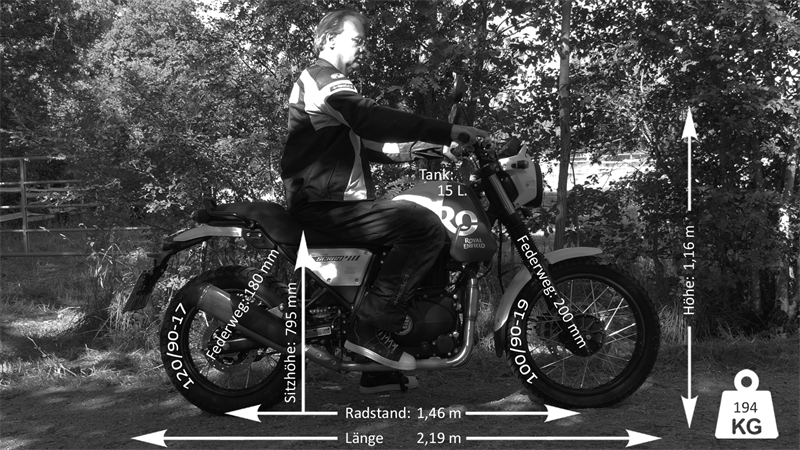 That's how you sit on the Scram 411.
The seat test is completely reminiscent of the Himalayan: You sit upright and enjoy a normal knee angle despite a rather low seat height of 795 mm. Even smaller people can easily get their legs on the ground and the passenger also has enough space. Mongolia, here we come. The view to the front is a bit different than with the Himalayan, because the cockpit is smaller and the windscreen is missing. Typical Scramber, nicely reduced. 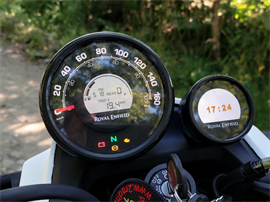 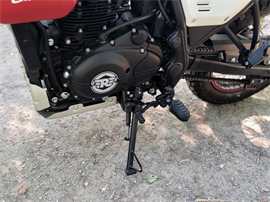 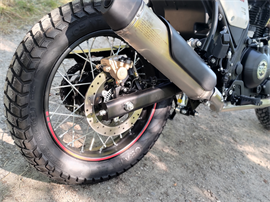 The cockpit of the Scram 411 consists of an analog speedometer plus an LC display with gear and fuel level indicator as well as a small on-board computer plus the practical navigation display, which we already know from the Meteor. To navigate you need an app on your smartphone, the display is limited to arrows that show you the direction. Simple but well done - which could also be said about the entire bike.

Apart from a 2-channel ABS from Bosch, the Scram 411 does not have much else to offer. With 24 hp, however, the question also arises as to why you would need traction control, for example. Driving modes? Wheelie control? The scram driver laughs about this, we don't need anything.

But then we would have found the main stand of the Himalayan, which RE gave itself at the Scram. Okay, a center stand does not belong to a scrambler and you also save a few kilos of weight, but still a pity. 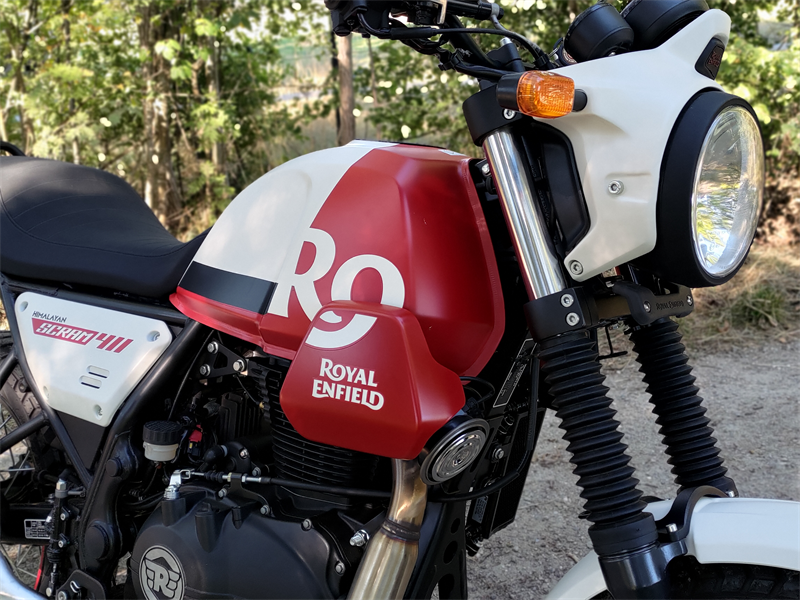 We like the sound of the Scram 411 (soundcheck see top right or in the video below). Beautifully mocking and typical single-cylinder sound, which sounds like more than it actually is. Because the Scram 411 has a displacement of - surprise: 411 cc and only 24 hp or 32 Nm torque at 4,500 rpm. The top speed is specified as 127 km/h. These are values that are only slightly above 125 level.
Since the Scram weighs 194 kg ready to drive, the driving performance is correspondingly poor. Overtaking manoeuvres you like to think twice here and with passenger and luggage you leave it anyway. Better to use the slipstream of the truck and glide behind. Seriously: Of course, the Scram 411 does not tear out trees, it is really slow. This was already the case with the Himalayan, and did it bother us? No. You know this anyway before you start your journey and therefore have no expectations in this regard, so you will not be disappointed.
On the contrary: You rather enjoy the area, the fresh wind around your nose and the smell of freshly mown grass. If you drive to your loved one, you can even quickly pick a bouquet of flowers, even while driving. Which Ducati rider can say that?
Even the usual test of brakes, chassis, etc. can actually be given here. It all works, it drives comfortably and that's it. Where other people are happy about lap records thanks to QuickShifter, we are happy about a hazard warning lights as standard!

The Royal Enfield Scram 411 is the personified reduction in its purest form. Nothing about this bike is superfluous, hardly anything can break and it is cheap to buy and maintain. It consumes only 3 liters per 100 km/h, so you only refuel a bit every 3 weeks. More deceleration is not possible and nevertheless or precisely because of this, this machine is incredibly fun. You don't have to be ashamed of the ice cream parlour because the Scram 411 looks outrageously good and everyone finds it at least sympathetic. Perfect also as a second machine!

We got the test bike from 2Rad Stadie in Pinneberg . There is also a Scram 411 for sale. If it's already gone, check out bikes from Brixton or Mondial. They are also cheap and visually similar. Or you can take the RE Himalayan, from our point of view still the more universal bike.
Vergleiche die
Royal Enfield Scram 411
mit anderen Motorrädern