King Of The Baggers 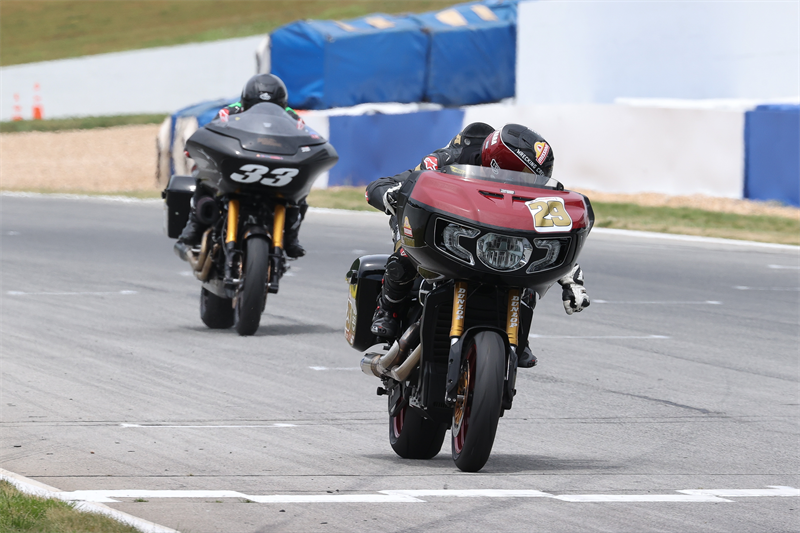 "The first King of the Baggers race in 2020 really turned the motorsport world upside down. The season has built on this with three races in 2021 and left fans hungry for more. With seven races in 2022, the King of the Baggers season is poised to take excavator racing to a whole new level," said Gary Gray, Vice President – Racing, Technology and Service at Indian Motorcycle. "These races are dynamic platforms to showcase the performance of our excavators and we are proud to expand our efforts with an official factory team and a growing number of talented privateers."

"We are excited to continue our partnership with Indian Motorcycle Racing," said Juan Gonzalez, Chief Executive Officer of Mission Foods. "They support outstanding figures in the sport who will provide great experiences for all fans of the King of the Baggers series."

There are six Indian Motorcycle excavators on the grid, including two factory machines and four privately supported vehicles.

Originally from Ireland, experienced road racer Jeremy McWilliams makes his debut in excavator racing. McWilliams, who drives the second S&S Indian Challenger factory machine, brings a wealth of experience and valuable technical knowledge to the team to refine and optimise the Indian Challenger settings for each race. Four-time Irish champion McWilliams began his professional racing career in 1993 and has competed in a variety of road races and series in various classes – including nine years in MotoGP.

"Jeremy is the ideal addition to our team. He brings a lot of experience and technical knowledge that will complement Tyler O'Hara's very strategic approach. He has the absolute will to be the fastest and to be at the front of every race," said Paul Skarie, President of S&S. "Having a second bike in the paddock is incredibly valuable because it allows riders to give each other feedback and help the team mechanics to optimise the settings on race day."

For the 2022 King of the Baggers season, the RSD team welcomes veteran racing driver Bobby Fong. Fong, who has competed in flat track and superbike races and won Road America 2 in 2021, brings a wealth of experience to the RSD team. Fong will race on the RSD Indian Challenger built by Steve Delorenzi with support from Sacramento Mile and SDI Racing alongside ever-popular privateer Frankie Garcia, who returns to the RSD Indian Challenger after finishing third in the 2020 season and fourth overall in the 2021 series.

"We are thrilled to expand our involvement in excavator racing with Bobby and are grateful to Steve Delorenzi for commissioning the factory team to build a second Indian Challenger and giving us the confidence to bring it to the track this season," said Roland Sands. "Bobby is an incredibly talented racer who demands a lot from himself and pushes himself to the limit, and that makes him a perfect fit for RSD. He and Frankie have known each other for a long time and will support and push each other."

Saddlemen is entering his third year in excavator racing, the second year with Indian Motorcycle Racing, and has commissioned long-standing V-twin workshop Lloyd'z Garage to look after the two Indian Motorcycle® racing machines. The management and management of the technical department is taken over by the duo Lloyd Greer and Tim Sutherland. Her support goes to Patricia Fernandez on board the Saddlemen Indian Challenger, who will be the only woman in the competition.

In addition to Fernandez, veteran motorcycle racer Cory West is also making his debut as a private rider with Indian Motorcycle®. After finishing the 2020 season in midfield and missing the 2021 season, West will ride the only Indian Motorcycle Chieftain excavator in the series. Unlike the Indian Challenger with fixed fairing and liquid cooling, the Chieftain has a fork-mounted fairing and an air-cooled Thunderstroke engine.

"V-twin performance is in our blood, and we've been toying with the idea of running our own private project since King of the Baggers debuted in 2020," said Lloyd'z Garage's Lloyd Greer. "When Saddlemen approached us, we jumped at the opportunity and felt very honored and grateful to take responsibility for their excavator races. Patricia is a tough racer and we look forward to seeing her back on the grid as Cory's diverse racing background and expertise will provide valuable feedback and insight for Patricia and our mechanics."

In the 2022 season, MotoAmerica® will host seven rounds of the King of the Bagger, including the season opener at Daytona International Speedway from March 10-12. For more information about excavator races visit MotoAmerica.com.