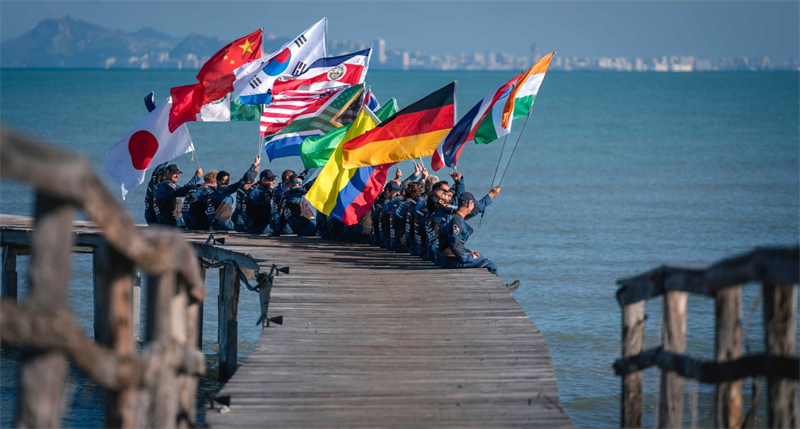 The BMW Motorrad International GS Trophy 2022 Southeast Europe, the eighth edition in total, ended exactly one month ago on 10 September. After 1,230 km of challenging courses and 15 special stages in the hills and mountain ranges of Albania, Team South Africa emerged victorious from the competition, not just once, but twice - as both the men's and women's teams took first place.

21 international teams with a total of 57 participants took part in this year's edition and Albania certainly put it to the test. At the end of a hot summer in Europe, the drivers had to endure temperatures of up to 37° C and extremely high humidity on these very technical tracks, which demanded excellent driving skills and excellent driving technique. They mostly had to deal with rocky trails, often littered with loose rock and broken boulders on a limestone subsoil - a tough test for the bikes and their riders. But also sand and mud had to be overcome. Since the trails with the Central Mountains and the Pindus Mountains passed two mountain ranges, a lot of often very steep and very technical uphill and downhill descents had to be mastered. Was this the toughest GS Trophy yet? Possibly. But all trophies were hard!

As always at the International GS Trophy, the days were long. The morning wake-up call was at 6:00 a.m. and often the drivers did not reach their destination before 6:00 p.m. As a rule, they sat in the saddle for nine to ten hours a day. Given that the total distance of 1,230km was less than half of the distance covered at the 2020 International GS Trophy in New Zealand, it only reinforces how technical this year's edition was. The long off-road sections were extremely demanding, the ultimate test for all riders and their bikes.

This year's GS Trophy motorcycle was the latest BMW R 1250 GS. Equipped with the latest tyre for tough adventure rides, the Karoo 4 from Metzeler, this GS was more than up to the task and inspired the riders on asphalt as well as off-road with its robust reliability and a performance of absolute superlatives.

No, it's beatable, but the future Trophy teams will have to make a huge effort if they want to make it in 2024. Until the final day of this year's competition, the results for both men and women were still completely open. On the men's side, the UK and Germany teams were pretty close together, while the China 2020 and USA teams were close to the top. This time, there were two Chinese teams, as Team China 2020 had already qualified for the GS Trophy 2020 in New Zealand, but was not allowed to travel to the event due to the corona outbreak. Two and a half years later, this team was also able to start the "ride of a lifetime" and they impressed with their driving skills and a good result.

In the women's classification, only one point separated South Africa and Germany after six days – so it could have been 50/50. But the last test is always tough, the toughest and most intense technique test of the whole week, and this is where the South Africans' thorough preparation tipped the scales – both in terms of individual skills and teamwork.

Also at this year's GS Trophy a lot of talent and a lot of skill were required, as can be seen from the even distribution of the points scored. The seven previous editions clearly showed that participating in this trophy would be a challenge. Many of the finalists in Albania had trained for years and had to pass several qualifiers to reach the necessary level of skill. They had to accept setbacks, learn from mistakes, build on their strengths and deepen their knowledge – after all, the GS Trophy is the motorcycle adventure par excellence.

Warren Ventner, Team South Africa: "We are thrilled to have won again; and everything depended on the last special stage. Now we are totally thrilled. It's so great to win for the fourth time. We were under pressure that we didn't want to be 'the' team that doesn't win in the end. We had decided to do our best and accept what was coming. We would also like to thank everyone who supported us from home. They really helped make this adventure possible."

Hanneli Zondagh, Women's Team South Africa: "It's just incredible. After day 6 we were only one point ahead of Germany and we were not the best on the last stage. Until the result was announced, we didn't know what the outcome would be. But somehow we managed to keep that one-point lead. I am overjoyed. Our result shows what teamwork can do if you just don't give up. It was a great competition. We also really enjoyed the time with the other women's teams, they were all fantastic and we had so much fun together!
When women discover motorcycling – this great sport – they quickly realize how liberating it is and how much fun it is to discover the world on a motorcycle, to get to know other people and other places, even in their own country. It's a wonderful thing."

This year, BMW Motorrad decided that the women's teams should participate with their own classification and the number of participants was doubled. Six teams, each with two participants, drove the same routes and special stages as the men's teams, but held their own GS Trophy classification. This was a great success, because as at the international female qualifiers in 2017 and 2019, they showed themselves as a team on the trails and in the challenges and supported each other. They were fearless and also well prepared in terms of driving ability and mental strength, although many of them were significantly smaller than their male teammates. Her handling of the big BMW R 1250 GS motorcycle was also impressive.

These women are at the forefront of an ever-growing movement of women passionate about adventure motorcycle riding, and it's worth reading their stories to understand how the female GS scene is evolving.

Christelle van der Meulen, Team South Africa: "For me, the GS Trophy is a competition involving mind, soul and body. You overcome your fears, your concerns. My friends and coaches said to me, 'You can do it.' And practice is part of it; the more you practice, the smaller the bike gets and the longer your legs get – except sometimes in special situations when your legs get shorter again! I feel inspired by Esther (Pinzon) and Karyn (Julliard), who are also very small – and we're already standing on our toes – but they are real energy packages and it's incredible what they do on the R 1250 GS. I love watching them."

Christelle: "Being here with Valeria (Zomazy) and Tere (Rivas) is a great feeling! We know each other from the International Female Qualifier 2019 in Spain, but did not make it to the last six. So we went home and trained. I believe that the mentality of not giving up is part of the GS spirit, but also our connection to each other, which has been created by the journey together. We mastered the trails together and they were there for me, helping me and supporting me when I was pretty much done. This is something very special. Of course, they also chased me in the competition – and that was pretty tough!"

With this year's edition, the International GS Trophy returned to boxing power with the BMW R 1250 GS Trophy Competition. A total of 126 vehicles were specially prepared.

Special modifications with accessories from the BMW Motorrad range include:


The International GS Trophy in the words of the participants.

A word from BMW Motorrad management.

Thank you very much. Custom bike based on BMW