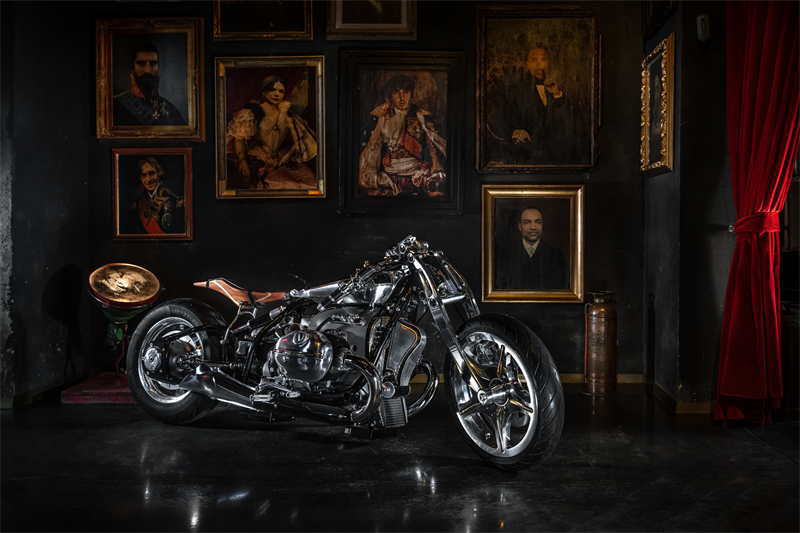 As part of the Top Marques Show in Monaco on 8 June 2022, Officine Riunite Milanesi and customizer Radikal Chopper presented the R 18 Magnifica developed with the support of BMW Motorrad Italia – another unique individualisation project based on the R 18.

R 18 Magnifica – an extreme interpretation of the R 18.
The R 18 Magnifica presents an extreme interpretation of the
"Big Boxer" powered cruisers, where luxury, craftsmanship and the finest materials come together in a unique and fascinating way. The development of this project, commissioned by Officine Riunite Milanesi, was entrusted to the well-known customizer Andrea Radaelli of Radikal Chopper – handmade from noble materials such as brass, aluminium and wood and packaged in an extraordinary design.

The idea to build a custom bike based on the BMW R 18 came from Raffaello Polchi, owner of Officine Riunite Milanesi and enthusiastic motorcycle enthusiast. Andrea Radaelli from Radikal Chopper is responsible for the implementation. Radaelli is a well-known name in the industry and has already won the MBE Award 2020 with his Ad Maiora – a special edition based on the BMW R 1100 S.

The approach to the production of Radikal Chopper motorcycles is indeed radical, which is also reflected in the design of the R 18 Magnifica. Andrea Radaelli on his approach: "The motorcycle has to be my own creation. I have no interest in modifying a concept that has already been created by others and has been very well made." Radaelli drew inspiration for the design of the BMW R 18 Magnifica from vintage motorcycles from the 1920s, 1930s and 1940s, and in particular from the BMW R 37.

The use of a material such as wood for certain details such as the handlebar grips is strongly reminiscent of motorcycles of yesteryear and, of course, the steering wheels of historic BMW automobiles. Wood also corresponds to Radaelli's desire to give the motorcycle something lively and fits harmoniously into the design of the R 18 Magnifica. It gives it a noble appearance that looks retro and modern at the same time.

Handmade from noble materials.
In his work, Radaelli dispenses with CAD drawings or renderings as a starting point. There is at most a sketch of the motorcycle – everything else is left to Radaelli's imagination and creativity. As a starting point, the R 18 was initially considered without all the elements necessary for the production motorcycle and then rethought taking into account the proportions between the front and rear sections – with the aim of achieving a harmonious visual logic.

Nothing about the R 18 Magnifica has been bought, but almost everything is conceived and built by hand. The exception are the rims milled from solid according to design specifications by Radikal Chopper. The innovative brake discs and calipers were also developed specifically for this project. The rear and seat are suspended in one piece and convey the idea of floating in the air. The rear is made of mahogany with a polished stainless steel middle part, which gives the bike a jewel-like look. Although the fork is visually reminiscent of examples of vintage motorcycles, it has a completely modern interior.

However, the electrical system remained unchanged. It continues to offer all the functions of the R 18. The dimensions and tyres have also remained true to the original and ensure impeccable functionality. However, the retro aesthetic hides a motorcycle that is around 100 kg lighter.

Disclaimer.
The vehicles shown may be modified and equipped with accessories from third-party suppliers and/or own components that are neither manufactured, distributed nor tested by BMW. BMW assumes no liability for the modifications (including the attachment, properties and use of the accessories shown). ATTENTION: The modification of production vehicles (including the attachment and use of third-party and own components) may impair the driving characteristics! Driving our vehicles in a modified condition is at your own risk.