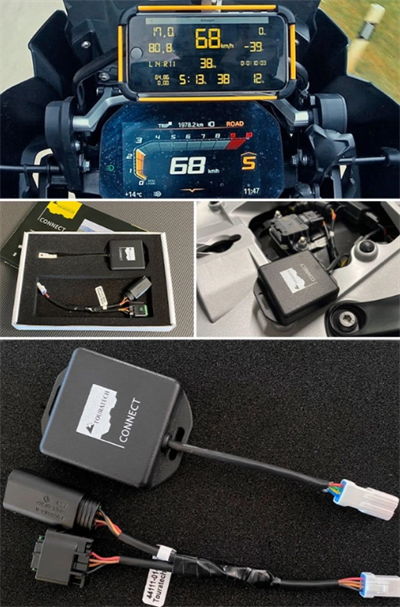 With »Touratech Connect", the Niedereschacher accessories specialist makes the smartphone a universal display in the motorcycle cockpit. The app conjures up a wealth of values on the screen and allows the differentiated analysis of vehicle data and personal performance.

The smartphone has established itself as an indispensable communication centre in the motorcycle cockpit. Touratech Connect, the novel combination of app and hardware component, now makes the smartphone a free-configurable real-time display that provides the driver with a wealth of data in a neatly structured way.

Data directly from the CAN bus
The hardware is installed firmly on the vehicle as a dust- and waterproof "dongle". The connection is vehicle-specific to existing connectors. The electronics read the data of the vehicle's own sensors directly from the CAN bus and transmit it to the smartphone via an easy-to-connect Bluetooth connection. At the same time, other connectivity features such as telephony or navigation can be used.

Clearly structured data wealth
The app, available for iOS and Android, visualizes the data on the smartphone's screen. In addition to basic values such as speed, speed, outside temperature or tank level, self-defined vehicle data can also be displayed, such as the temperature at which the engine can be driven in a sporty manner, or the speed to change gears when driving fueling – signaled by a shifting flash. Also interesting is the number of curves driven, the number of shifting operations on a track or the currently called engine power.

Numerous parameters can be queried to improve your own driving style. For example, the braking force (current, average, maximum) can be displayed, which allows conclusions to be drawn about remaining reserves in individual braking behaviour. The inclination behavior can also be analyzed with regard to the utilization of the boundary range. But performance parameters such as acceleration from zero to one hundred or curve speed can also be captured.

In total, there are more than 60 values for the operating status of the motorcycle and the driving dynamics that Touratech Connect records. The data are logically structured in the eight function areas motor,lighting,brakes,switches & levers,driving dynamics,extremes,special functions and states.

The values can be stored either during a "session" (as long as the dashboard is open) or across sessions for a motorcycle profile.

Individual configuration
There are almost unlimited possibilities for the configuration of the display. First, the driver can decide what data he wants to see at all, and then configure the display according to his wishes. The assignment and size of the fields are as free as the placement. All good things are 3