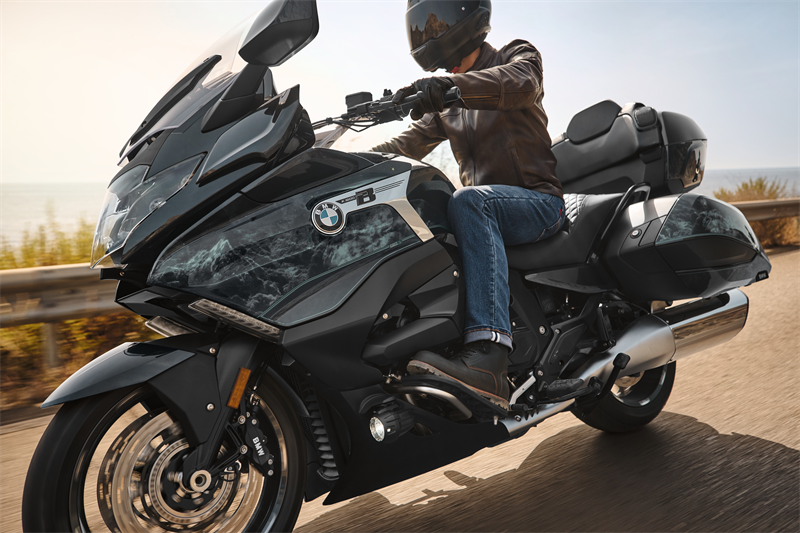 Six-cylinder in-line engines have always been one of BMW's flagship drives, and since 2010 BMW Motorrad has been offering fascinating six-cylinder performance and luxurious equipment at the highest level with the K 1600 models. The K 1600 GT embodies the particularly active, dynamic version of the six-cylinder concept, while the K 1600 GTL favours enjoyable travel with its more comfortable ergonomics and top-case top case as standard.

The K 1600 B is of a completely different flower. It offers characteristic "streamlining" with a deep rear section in excavator style. Their motto is "The Spirit of the Open Road". It is the epitome of elegance, power and luxury on two wheels and allows the driver to experience every road, every tour and every moment particularly intensely. Derived from the K 1600 B, the K 1600 Grand America finally combines the superior performance of the in-line six-cylinder engine with exclusive equipment features that make long-distance driving in the style of American Highway Cruising a comfortable and fascinating experience, both alone and in pairs.

For use in the new K 1600 GT, GTL, B and Grand America, the inspiring six-cylinder engine has been adapted to the current EU-5 regulations. From a technical point of view, the core of this is the use of the BMS-O motor controller, two knock sensors and two additional broadband lambda probes. In addition to drastically improved emission values, there are also noticeable advantages in the power and torque display of the six-cylinder engine. The rated output is still 118 kW (160 hp). However, it is now already achieved at a speed of 6 750 min-1 and thus 1 000 min-1 earlier than before. In addition, the technical innovations result in an increase in maximum torque from 175 Nm to 180 Nm at a speed of still 5,250 min–1. Even more confident pulling power and even more powerful start are the noticeable positive effects for the driver.

Another new component is the engine drag torque control (MSR). With it, unstable driving conditions, which can occur in over-push mode or when downshifting due to excessive slippage on the rear wheel, can be safely avoided.

With the BMW Motorrad Dynamic ESA "Next Generation" (Electronic Suspension Adjustment) electronic chassis, the new K 1600 GT, GTL, B and Grand America open up even higher dimensions in terms of driving safety, performance and comfort, as the damping is automatically adapted to the conditions depending on the driving conditions and driving manoeuvres, and automatic driving position compensation takes place in all load states.

For decades, BMW Motorrad has been regarded as a pioneer when it comes to safety when it comes to motorcycling. Accordingly, the new K 1600 GT, GTL, B and Grand America already offer state-of-the-art LED lighting units as standard. The new full-LED headlight with LED lens technology and iconic daytime running lights (depending on the market) illuminates the road with an unmatched bright, clear light and underlines the prestige claim of the new six-cylinder models. Another standard component of the headlight is the "Adaptive Cornering Light" swivel function. Here, the dipped beam of the LED headlight is turned into the curve depending on the inclined position. In this way, curves are almost fully illuminated because the light is located where the motorcycle is moving.

In addition, by swivelling the entire headlight unit (±2°), the driving dynamics (braking, acceleration) are automatically adjusted and optimum illumination is ensured at all times. In addition, a number of new lighting functions such as the "welcome light" are available.

The new K 1600 GT, GTL, B and Grand America are equipped as standard with a new 10.25-inch TFT colour display with integrated map navigation and connectivity. With excellent readability, clear menu navigation and a highly integrated operating concept, they are at the forefront of their motorcycle segment. The new 10.25-inch colour display makes it possible to display a navigation card in the instrument cluster and thus dispense with an additional display.

Audio system 2.0 – a new digital sound dimension as standard or as an optional extra ex works.

With the Audio System 2.0, the new K 1600 GTL and Grand America already offer an even more intense sound experience as standard. For the K 1600 GT and K 1600 B, the audio system is available as an optional extra ex works.

For the new K 1600 GT, GTL, B and Grand America, there are three attractive colour schemes to choose from: a basic variant, a style variant and the 719 option. Particularly noteworthy is the option 719 "Midnight", which is only available on the K 1600 B and the K 1600 Grand America. The highlight of this equipment variant is the painting in Meteoric Dust II metallic with the theme "Galaxy" depicted in the water transfer printing process.